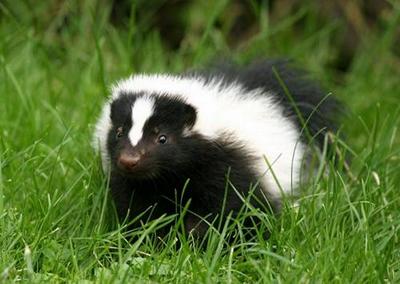 
Who is the scariest animal in the world? Not a lion, not a bear, not a tiger, and not any other the most dangerous predator, but our today’s hero – a skunk. The biggest predators bypass skunk. The reason is the famous smell of skunk, so unbearable that it scares away almost everyone.

The skunk belongs to the mammals, and until recently zoologists attributed it to the family of weasels, but now they have changed their opinions. Now it is believed that skunks form their own family of skunks.

It is easy to recognize a skunk by its color, consisting of white spots (or stripers) on a black background. Skunks have a very strong build, fluffy tail and short legs with sharp claws, perfectly adapted for digging.

Skunks have poor eyesight, but this is compensated by an excellent sense of smell and hearing. 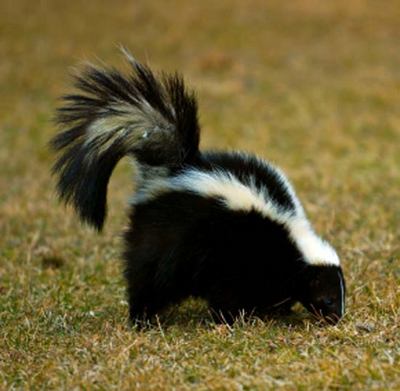 The largest of the skunk family – the horned skunks weigh up to 4.5 kg. The smallest skunk (a spotted skunk) is not heavier than 1 kg.

In general, the appearance of the skunk is very attractive; some people even have skunks as a pet, (after having solved the problem with their smell). 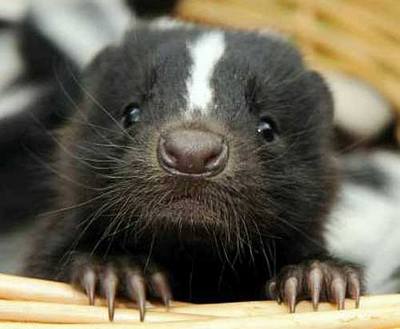 In fact, the smell of skunk serves as unusual protection from predators. In case of danger, skunks don’t try to hide from enemies, but instead, raise their tail (this is a serious warning). If the warning did not help, then the skunk turns its back and shoots at the enemy with its smelly oily liquid. As a result, many predators, knowing about such a specific way of protection, prefer not to mess with a skunk at all and stay away from it. 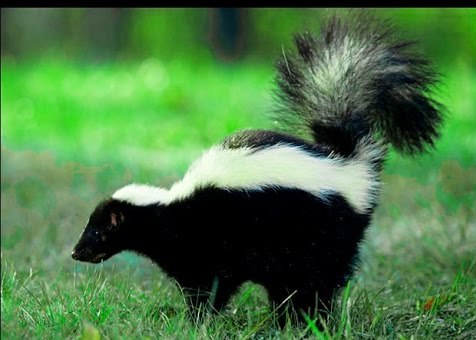 Interesting fact: the smell of the skunk’s secret is so stable that if it gets on human clothes, it is better to burn it immediately. Since all means to clean the clothes after that will only be able to disguise the unpleasant smell, but it can’t be completely removed.

Where do skunks live? Skunks live in North America (from Canada to Mexico), in South America, and on the islands of Indonesia.

As habitats, they choose the forest area where they feel most comfortable.

What do skunks eat? The skunks are omnivorous predators. The skunk diet consists of various small rodents, frogs, and lizards. Since they are omnivorous animals, they can eat grass, leaves, various fruits and nuts besides meat.

Skunks often go on a night hunt. In order to catch the prey, they use their well-developed sense of smell and hearing. They arrange ambushes for small rodents, waiting for them, and when they appear, they make a leap, grabbing their prey with their paws and teeth.

Besides this, skunks love honey, and when a beehive comes across on their way, they will certainly ruin it. Bee bites are not terrible for them because of the thick wool. 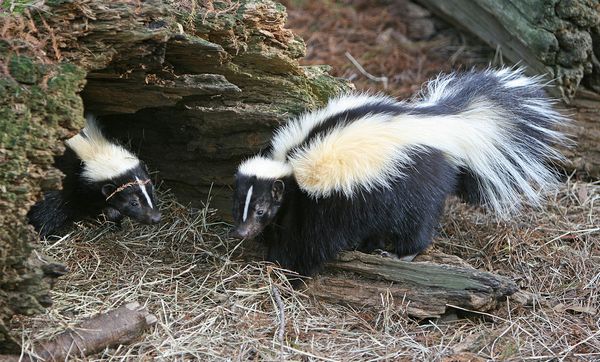 Under natural conditions, skunks don’t live long – two or three years, but at home, their life span can reach up to ten years.

Skunks live in small families or singly. Skunks do not hibernate for the winter like bears, but, nevertheless, they spend the winter in their burrows, which they dig themselves or seize from other animals. During the summer and autumn, they try to accumulate for the winter as much as possible reserves of subcutaneous fat, with which it is much easier to get through the winter. With the onset of spring, the skunks go out of their burrows, become more active 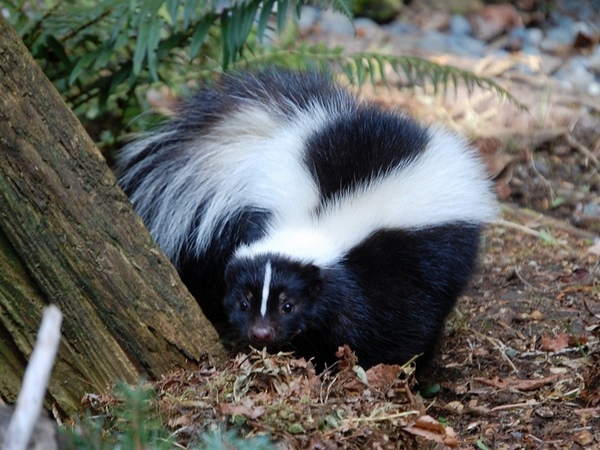 Thanks to such an amazing “aromatic” protection, a skunk has practically no enemies in natural conditions. Sometimes young predators may attack them: foxes, coyotes, pumas, but only because of inexperience, while they are still unfamiliar with the “skunk flavors.” Some birds can hunt skunks, such as the Virginian Eagle Owl living in the USA, but only because of its weak sense of smell. The owl doesn’t feel the protective smell of the skunk.

This is the most common skunk. The striped skunk lives in North America from Canada to Mexico, often settle in the forests. 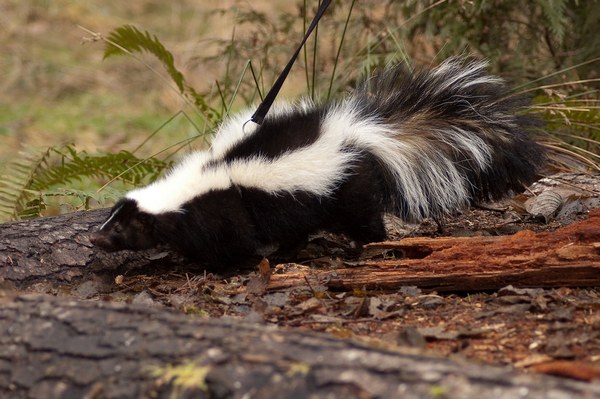 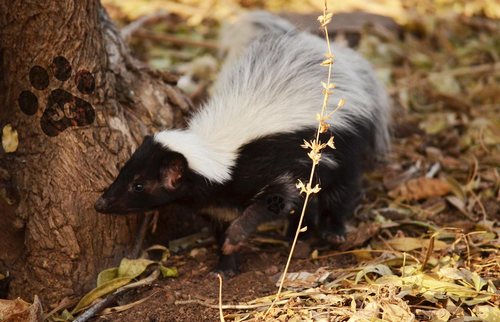 This is the smallest skunk in the world. Besides this, the Eastern Spotted skunk has fur covered with white torn stripes, creating the illusion of spots. It lives in both Americas. 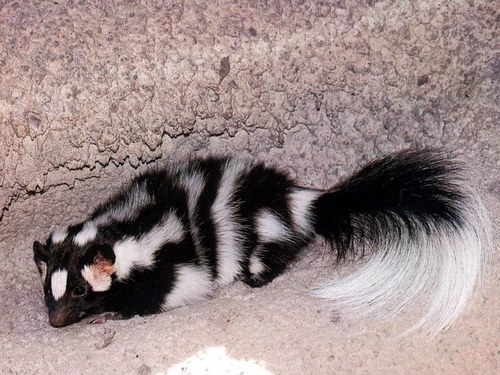 The South American skunk lives in many countries in South America: Peru, Bolivia, Paraguay, Argentina, Chile. Its appearance and habits are in many ways similar to the striped skunk. 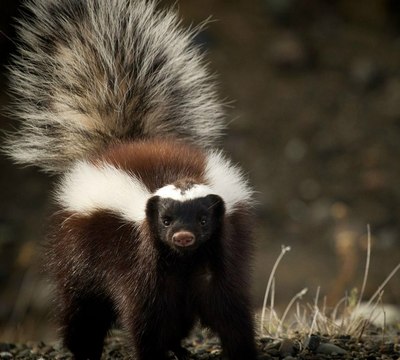 Skunks are polygamous animals, one male engages in sex with several females, creating a small animal harem. The mating season in skunks begins from the beginning of spring. After a short pregnancy, the females give birth to young baby skunks. On average, one skunk mother gives birth to 6-10 babies. Little skunks, like kittens, are born blind and only after a week they begin to open their eyes. At first, they are completely helpless and dependent on the mother who feeds them with milk. Then the babies begin to grow rapidly and grow stronger, and by the age of four months, they already pose a serious “odorous” danger to those around them. 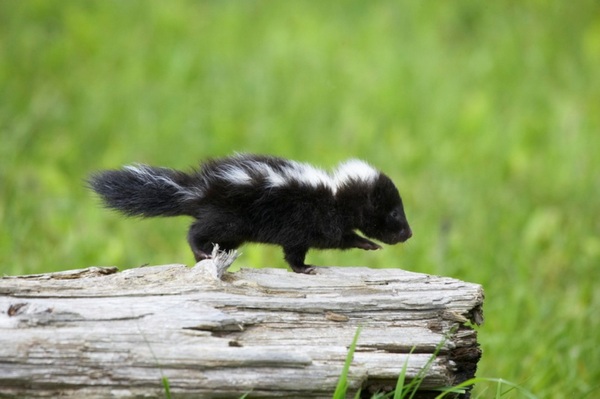 The care and nutrition for the skunk are in many ways similar to those of dogs. You can feed skunks the same food that you feed your dog. 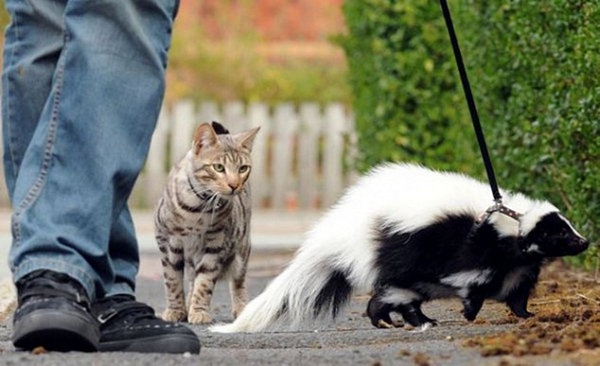