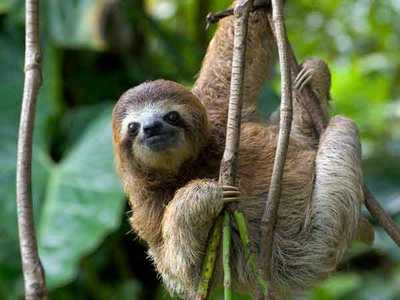 
The sloth got its name for a reason, because it is indeed one of the slowest representatives of the animal world (although turtles can compete with this title), and still the sloth is the slowest among mammals. The beautiful children’s animated cartoon “Zootopia” shows sloths as very funny creatures.

In today’s article, we will describe the real sloths living in natural conditions.

What does a sloth look like? The appearance of the sloth is the most amazing and unique, it is not like any other representative of the animal world. Anteaters and armadillos are closest relatives of sloth, but they are completely looking different.

A characteristic feature of the sloth is the presence of a special finger in the form of hooks. The sloth has three fingers but there are species that have only two. These fingers are not only for the sake of beauty, but they are also very strong and tenacious, with their help sloths can easily hang on the branches of trees, where they spend most of their lives. 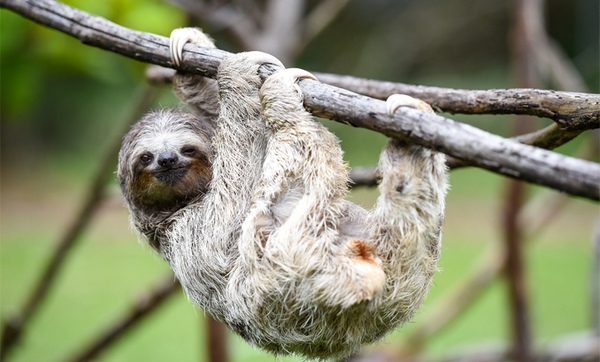 Sloth hanging on the tree.

How big do sloths get? The sloth size is not big: the body length is usually 50-60 cm. The sloth weight is 4-6 kg. A sloth’s body is covered with fur, which has a brown-gray color.
A sloth’s head is small and also covered with fur, sometimes so big that only the eyes of the animal are visible. An interesting fact: a sloth’s teeth are devoid of enamel; however, they are all equal.

Do sloths have tails? Yes, but they have it very small, so the tail is almost invisible under the thick fur.

Nature gave these animals an excellent sense of smell, but with other senses, it didn’t work out very well: sloths have poorly developed vision and hearing. Why do sloths move so slow? A sloth’s brain has a small size, and this is probably the reason for their slowness. Yet on the other hand, these animals are always calm, good-natured, and phlegmatic. 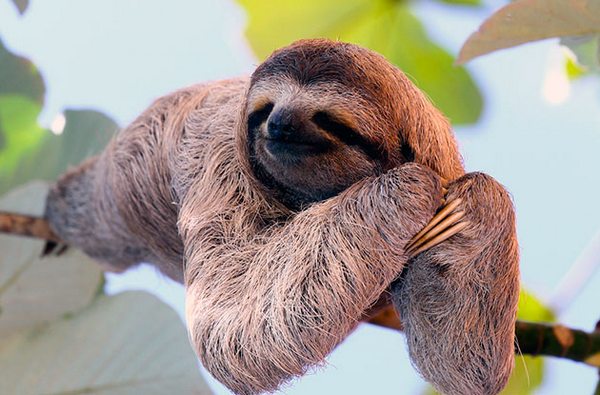 The internal structure of the sloth’s body is not the same as in other mammals. For example, the liver is located closer to the back, the spleen is on the right, their stomach and intestines are disproportionately larger.

A sloth’s movement on the ground looks very comical, this all because of the long fingers with large hooks; it seems that the sloths try to overcome even the smallest obstacle with great effort. The sloth’s speed on the ground is only a few meters per minute! 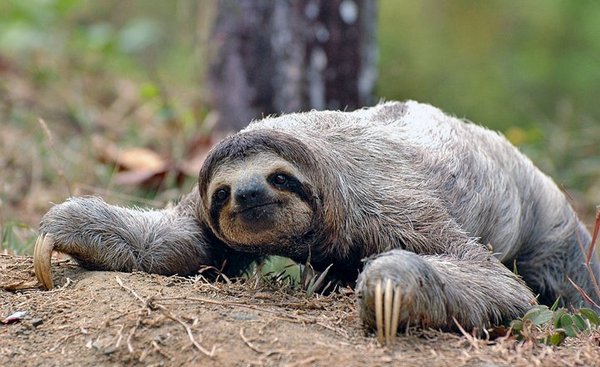 Yet sloths are excellent swimmers, they swim many times faster than they move by land. 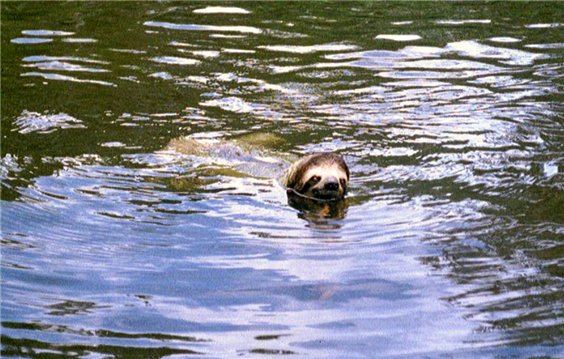 It is also interesting that sloths have one of the lowest body temperatures among mammals. Such a low temperature is due to the fact that a sloth’s metabolism is extremely slow.

Sloths love a good sleep. How long do sloths sleep? Usually, they sleep from 10 to 15 hours a day, which is also rare in the animal world. It is interesting that sometimes sloths sleep, just hanging on the branches of a tree upside down. 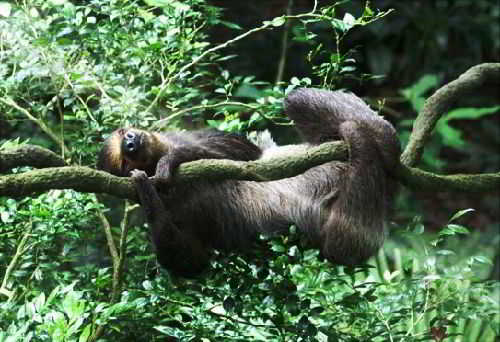 Where do sloths live? Sloths live only in the warm, tropical regions of Central and South America: in Brazil, Honduras, Paraguay, Uruguay, Panama, in northern Argentina. As habitats, they always choose dense forests where they feel comfortable among tree crowns.

What do sloths eat? Sloths are herbivores. A sloth’s main food is the various leaves and fruits that grow right under their noses. 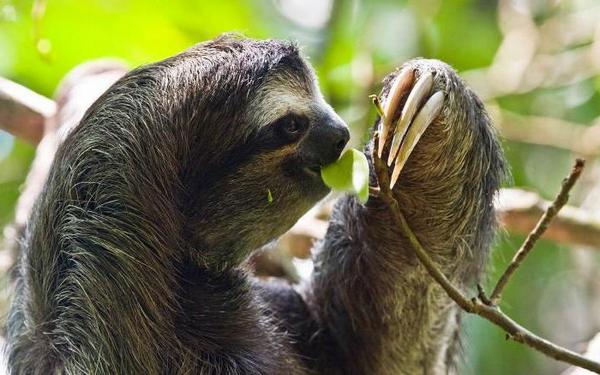 Sloths may become the prey for various predators of South America, primarily for the anaconda, cougar, jaguar, and panther. Predators attack sloths at the moment when they get down from trees, on which they are in relative safety.

Since ancient times, man has also been the eternal enemy of the sloth: American Indians have been hunting sloths for centuries, finding their meat tasty and nutritious.

How long do sloths live? Sloth lifespan in natural conditions is 10-20 years. There were cases when sloths lived to 32 years in the zoo. 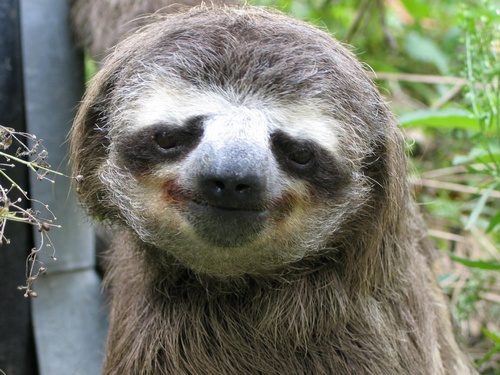 What do sloths do? Sloths are really lazy and phlegmatic animals, most of the time they spend sleeping on the branches. Besides this, sloths love and appreciate loneliness, and they are rarely found in groups. If sloths would meet their own kind, then they will never show even the slightest signs of aggression (thanks to the peaceful nature of these animals).

The three toed sloth is the most typical and common representative of the sloths. Everything described above concerns, first of all, the three-toed sloths. 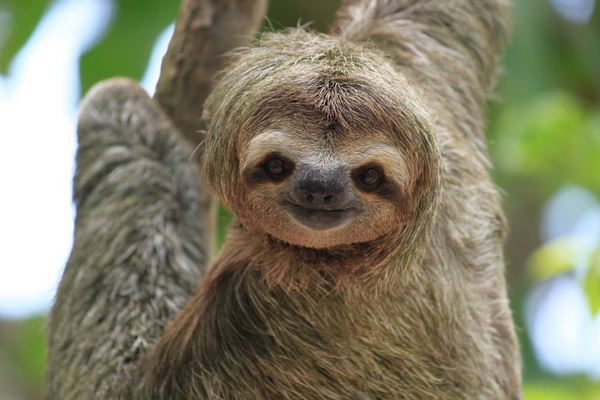 The pygmy sloth also has three fingers (like the three-toed sloth) but is much smaller. It is the smallest of the sloths, its body length is on average 40 cm, and its weight is no more than 2-3 kg. In all other respects, except for the size, it looks like its big three toed relative. 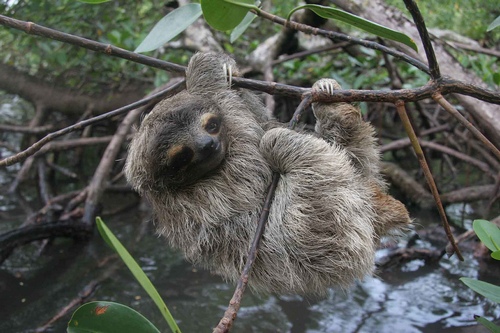 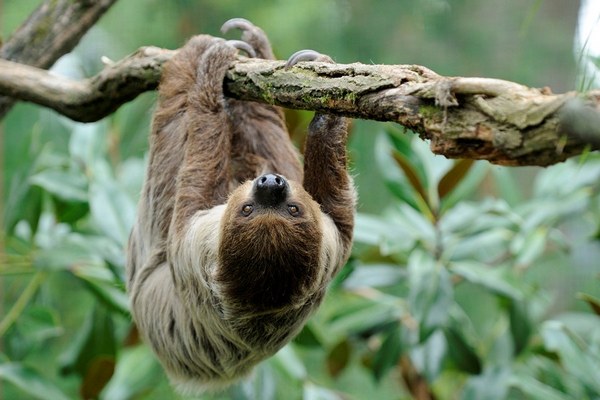 How do sloths breed? Depending on the species, the mating season for these animals occurs at different times. Three-toed sloths usually start mating in spring, in March-April. Two- toed relatives can do this thing all year round.

The pregnancy of the female sloth lasts six months, after which only one baby sloth is born. It is interesting that the birth of the sloths takes place right on the tree.

Barely born, the baby sloth grabs the mom’s fur and quickly finds her breast in search of milk. Mother-sloth is caring and tender to her child. 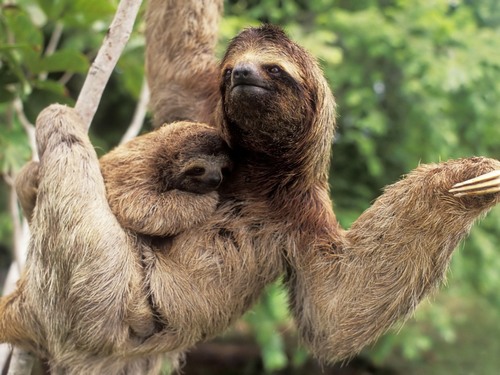