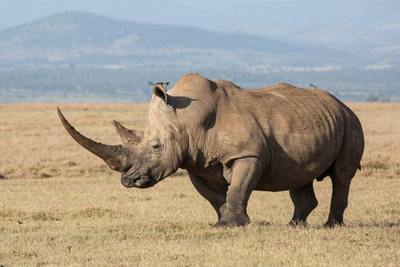 Rhinoceros – is the famous animal of Africa; a kind of symbol of the “black continent”. Not without a reason, rhino enters into the “big African five” along with an elephant, a buffalo, a lion and a leopard, the same five animals that were once the most honorable hunting trophies. The rhino has weak eyesight, but with its size and strength, it is not its problem.

What does a rhino look like? The rhino scientific name – Rhinocerotidae means “nose”, and “ceros” – horn. This name aptly characterizes this beast, because the big horn on the nose, growing from the nasal bone is an important attribute of all rhinos. 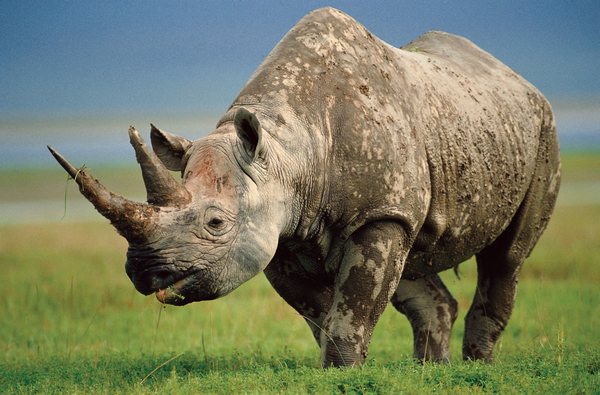 Some people ask: “how big is a rhino?” and “is a rhino a mammal?”. The rhino is the biggest land mammal after an elephant – the length of a rhino varies from 2 to 5 meters, with a height of 1-3 meters. How much does a rhino weigh? The average weight of a rhino is 2-3.6 tons.

The colors of rhinos depend on their species. It seems that the names of rhino species originated from their color: the white rhino, the black rhino. In fact, the real color of the skin of all rhinos is the same – gray-brown. Yet due to the fact that rhinos love to wallow in the ground of different colors, they got their names. 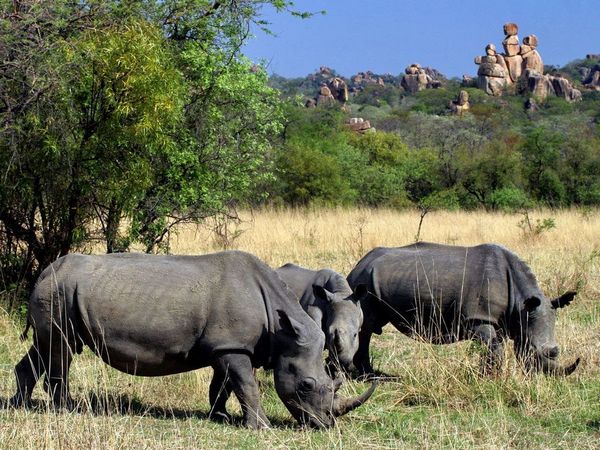 The head of the rhino is long and narrow, with a steep forehead. A small rhino’s eyes with brown or black pupils look very contrast to the background of their large head. As we mentioned at the beginning, rhinos have weak eyesight – they can only see moving objects from a distance of no more than 30 meters.

A rhino’s hearing is well developed. A rhino’s ears are like tubes that constantly rotate, catching even a weak sound. 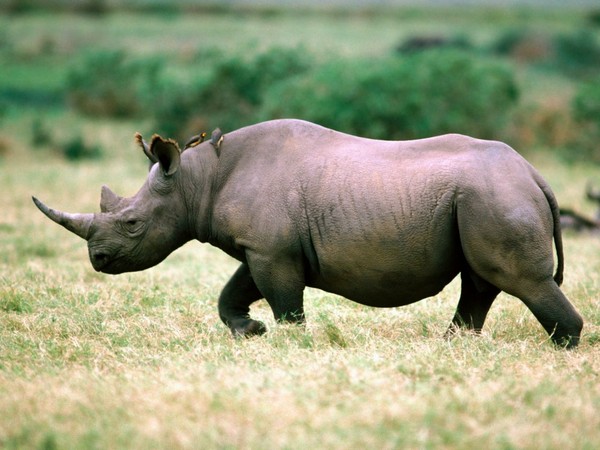 A rhino’s lips are straight and clumsy, with the exception of the Indian and black rhinos, which have a mobile lower lip. All rhinos have 7 cheek teeth in the dental system; they are strongly erased with age. In addition to the teeth, Asian rhinoceros have incisors that are absent in African rhinos.

All rhinos have thick skin, which is almost completely devoid of fur. The Sumatran rhino is an exception; its skin is still covered with brown fur.

The legs of the rhinoceros are heavy and massive. There are three claws on each foot.

A rhino’s horn is his business card and should be mentioned separately. So, depending on the species, a rhino may have one or two horns, with the second horn located closer to the head. Rhino horns consist of the protein keratin; hair and nails in humans, a needle in porcupines, feathers in birds, and armor in an armadillo has the same protein.

In general, all the functions of the rhinoceros horn have not been fully studied by zoologists, but for instance, scientists have noticed such a curious fact – if the horn is removed from the female rhino, then she will no longer be interested in her baby.

The white rhino is the owner of the longest horn; it reaches 158 cm in length.

How long do rhinos live? The life span of rhinos is long: African rhinos live in the wild for an average of 30–40 years and live to 50 years in zoos. Yet the biggest long-livers among rhinos are Indian and Javanese rhinos, which can live up to 70 years, almost as a term of human life. 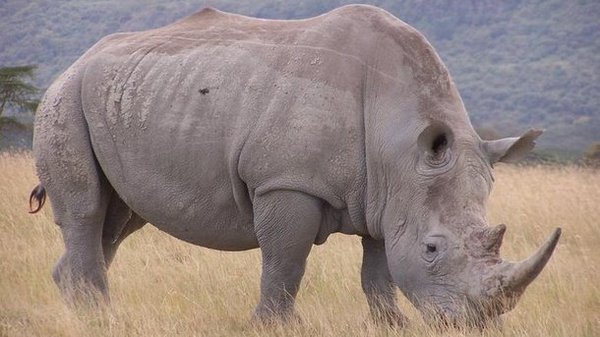 All rhinos live alone, without creating herds. White rhinos are exceptions; they form small herds consisting of females and baby rhinos. Males and females of rhinoceros gather only during mating. Despite such a peculiar hermit life, rhinos have friends among other members of the animal world – dragging (little birds) constantly accompany rhinos, pecking insects and ticks off their skin. 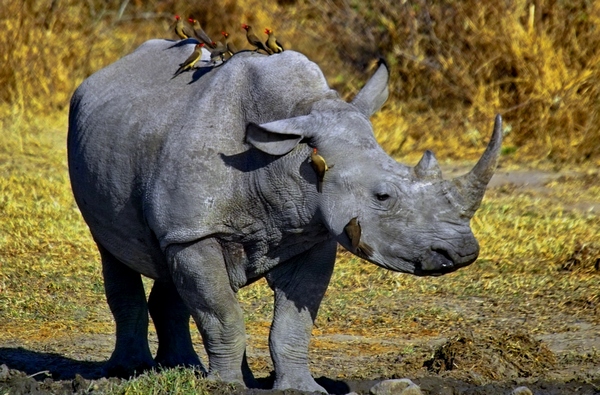 Each rhino has its own territory – a pasture area which is its personal “land”. The rhino jealously guards its territory. The rhinoceros mark the borders of their “possessions” with heaps of dung, which also serve them as a kind of “aromatic” landmark, which allows them to navigate in space and stay within their “lands”.

Rhinos are especially active in the morning and in the evening. At this time they actively eat. During the day and the night, rhinos sleep on their stomachs or taking the “mud baths” so beloved by them. The rhinoceros sleep is very strong, and some people say that at this time you can easily sneak up on them and even grab them by the tail (but still we highly recommend you not to do this))). 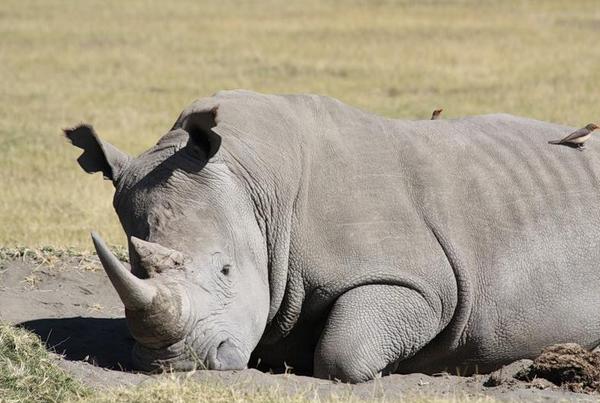 Rhinos are cautious animals. They avoid people, but when they feel danger, they always attack first, and they attack very violently. That is why you need to be extremely careful and delicate when meeting with a rhino. An angry rhino can run at a speed of 40-45 km per hour, and nothing can stop such a running beast, for instance, it can easily ram and even flip a light car.

What do rhinos eat? Rhinos are herbivores. However, they are very voracious, so on average, a rhino eats up to 72 kg of plant food per day. The main diet of rhinoceros is grass and leaves falling from trees. Black and Indian rhinos may eat the shoots of trees and shrubs. Sugarcane is a favorite delicacy of the Indian rhino, while the Sumatran rhino loves various fruits, especially figs and mangoes.

The main enemy of the rhinoceros is the man who once mercilessly exterminated these animals, mostly for the sake of their famous horns, which, according to popular belief, have many healing properties. They were exterminated to the point that now all five species of rhinos are listed in the Red Book, since due to their low numbers they are on the verge of extinction. 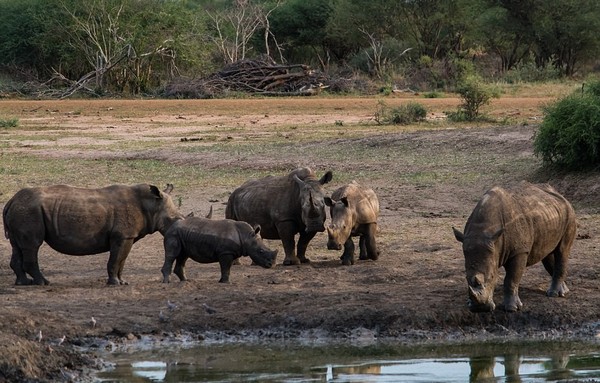 There are five types of rhinos and we’ll describe them all. 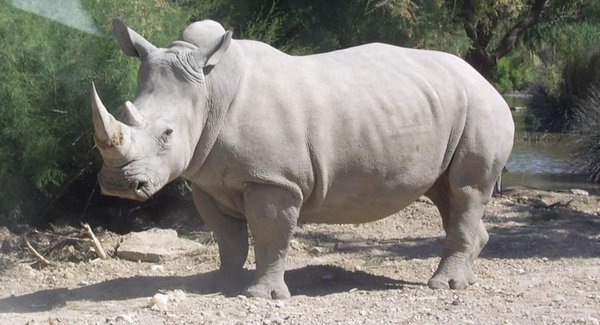 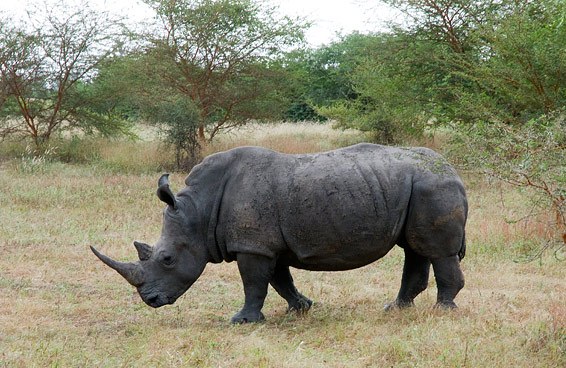 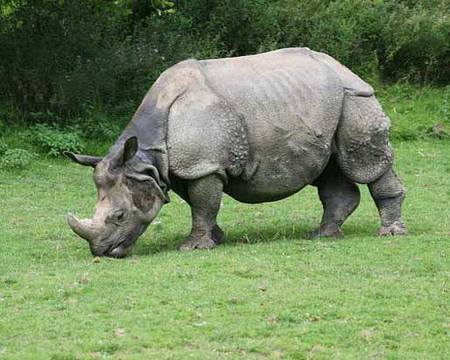 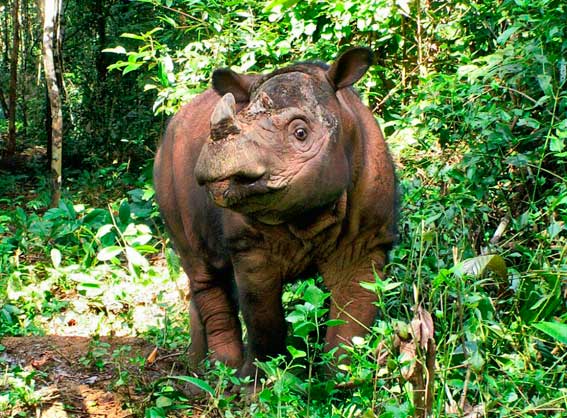 This rhino is in a particularly poor condition, according to estimates of zoologists, there are only about 50 individuals of the Javan rhino are currently preserved. It dwells only on the island of Java in a specially created reserve for it, in which all efforts are made for its subsequent preservation. The Javanese rhino is similar to the Indian rhino, but its characteristic distinguishing feature is the complete absence of horns in females. Only males of the Javan rhino have horns. 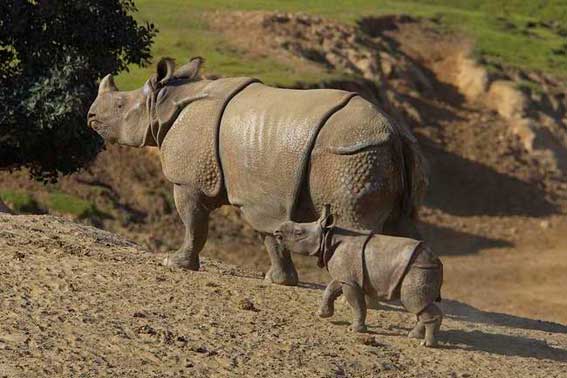 Rhinos reach sexual maturity in the 7th year of life. Yet the male rhinoceros can begin the process of mating with the female only after he has acquired his territory. The mating season usually happens every six weeks, during this period the male begins an intensive search for the female. During the pursuit of the female rhino by the male, they can even fight.

The pregnancy of a rhino female lasts one and a half years, and only one baby rhino is born. How much does a baby rhino weigh? The newborn baby rhino weight is about 25 kg. Interesting fact, the white rhino babies are born hairy. Within a few days, small rhinos are able to follow the mother, and after three months they can eat plants. However, during this period, the basis of their nutrition is mother’s milk. The rhino female feeds her babies with breast milk for a whole year. Small rhinos don’t have horns, which begin to grow during the 2-3rd year of life. 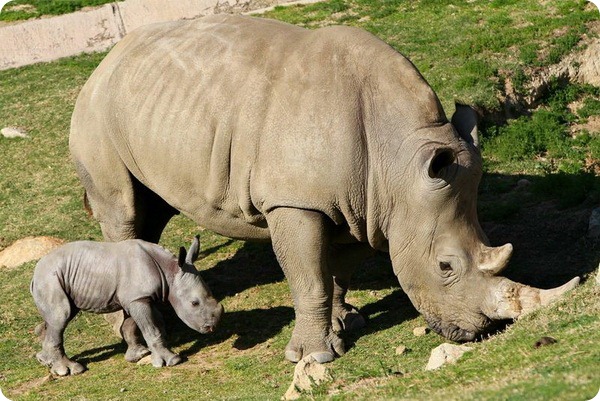