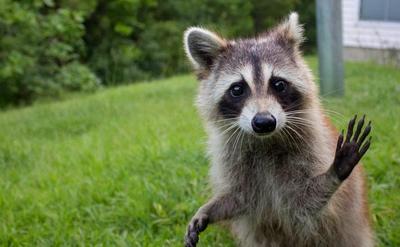 
The raccoon is one of the funniest representatives of mammals. Raccoons are very mischievous and at the same time sociable, peaceful and friendly, they easily make contact with a person. They are infinitely curious and the smartest among animals along with dolphins, monkeys, elephants, cats, and dogs.

The name “raccoon” comes to us from the Indian word “Arakun”, which translates as “scratching with his own hands.”

Raccoons are predatory mammals. Raccoon dogs are close relatives of raccoons (they are often confused with raccoons). 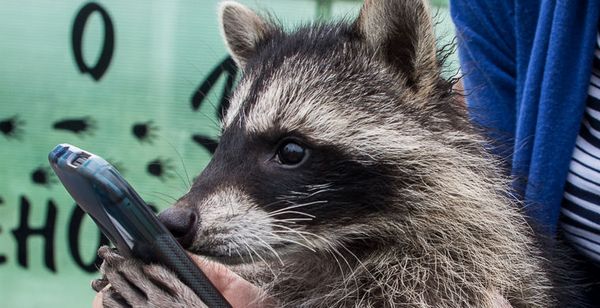 How big is the raccoon? The length of its body is usually 45-60 cm. The average weight of a raccoon, depending on the species, can vary from 2-5 to 8-15 kg. Moreover, males are often larger than females. The structure of a raccoon’s body is a bit like a fox or a dog. The raccoon’s paws are an important distinguishing feature of these animals; they have very elongated pads, even reminiscent of human hands. So all raccoons have excellent grasping abilities. 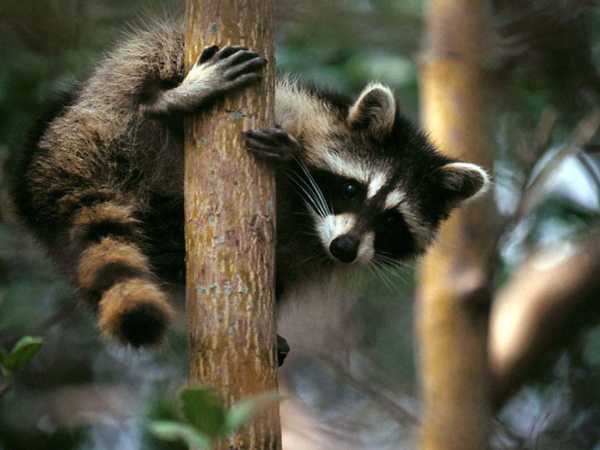 The raccoon’s tail is long and usually fluffy. As for the color, all raccoons have a grayish-brown color, and their tail is painted with transverse black and white stripes.

The raccoon’s head is very wide, has a short and sharp muzzle, and small and rounded ears. 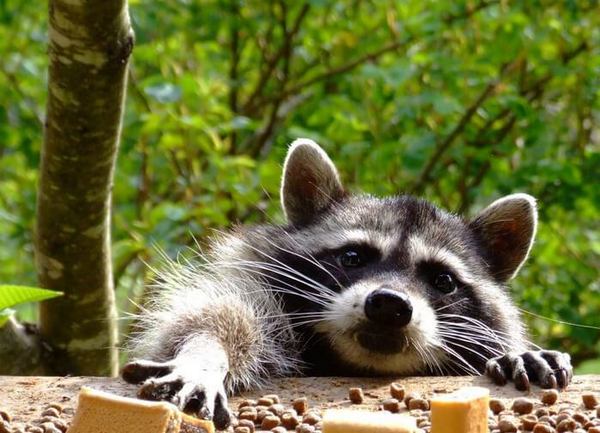 Interesting fact: all raccoons not only easily climb on trees, but also swim well, and can even swim in cold water, which is facilitated by the special composition of their fur, which consists of 90% thick undercoat as if specially adapted by nature to protect it from cold water. 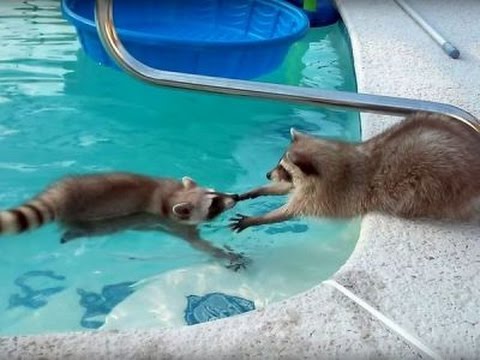 How long do raccoons live? The lifespan of raccoons at home is 10-15 years. Yet their relatives living in the forest, in the wild, rarely live even up to 10 years.

Where do raccoons live? Raccoons are natives of North and South America; they can be found in forests from Canada to Argentina. Raccoons came to Eurasia with the discovery of America by Europeans. Raccoons populations have been created in many countries of Europe and also in the Caucasus.

Raccoons are friendly, peaceful, active and curious. However, despite their peacefulness, they are not cowardly. They can bravely defend themselves in case of danger, bite, and scratch. They can also threaten to rumble, trying to scare a potential opponent. In particularly dangerous situations, raccoons can flee or pretend to be dead.

Despite friendliness and sociability, raccoons prefer to lead a solitary lifestyle in natural conditions, gathering together only for mating and for winter hibernation. Raccoons, like bears, fall into winter hibernation for the winter, and the biological mechanisms of hibernation in raccoons are similar to bear. Hibernation itself in raccoons lasts depending on the duration of the cold period. Canadian raccoons sleep the longest period, in which hibernation can last up to 5 months, but raccoons that live in the warm tropics of Central America do not fall into hibernation at all, due to the lack of winter in their habitats. 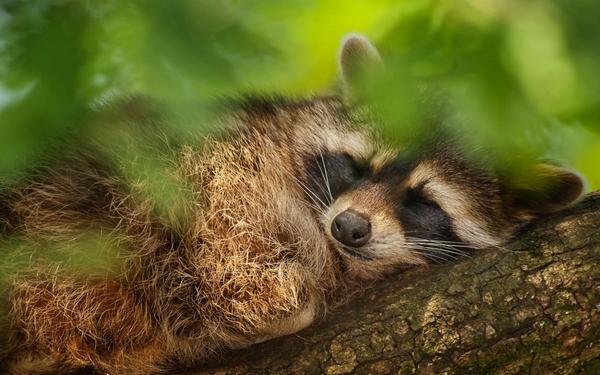 Raccoons are a twilight animal, which means they are most active in the evening and at night, preferring to sleep in their cozy lair on the day. But with the onset of the evening, they go out in search of food.

What do raccoons eat? Raccoons are omnivores; so they can eat all kinds of berries, nuts, acorns, fruits, and small animals: frogs, large insects, snails, crayfish, and crabs. They are very good at catching small fish. 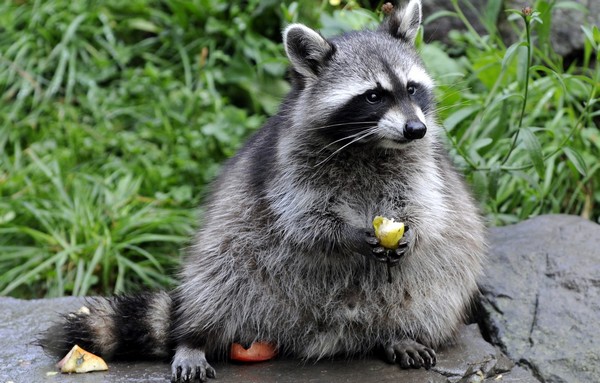 In turn, raccoons themselves can become prey to other larger predators: bears, wolves, lynxes, coyotes, wolverines, and cougars. In trying to escape from their enemies, raccoons often resort to tricks – they pretend to be dead, but when this trick does not work, and it is not possible to flee, they desperately resist, struggling for their life. However, unfortunately, this is not always possible.

There are 4 types of raccoons, and further we will describe them in more detail:

This is the most common raccoon living throughout North and Central America, and since some time in Europe. 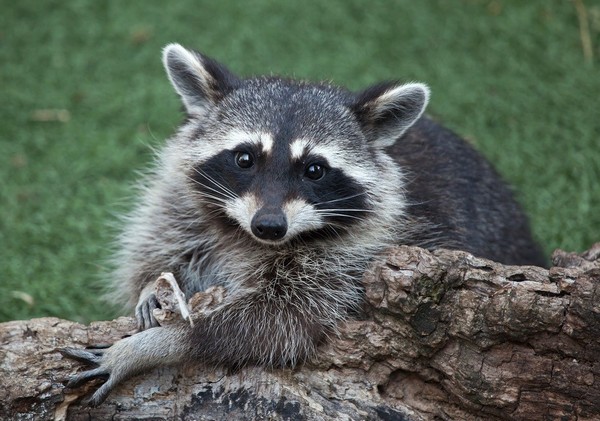 A distinctive feature of this raccoon is a characteristic pattern around the eyes, somewhat reminiscent of a gangster mask. The fur of this raccoon is shorter, and the body is more streamlined. The Crab-eating raccoon lives in the jungle of Central and South America. 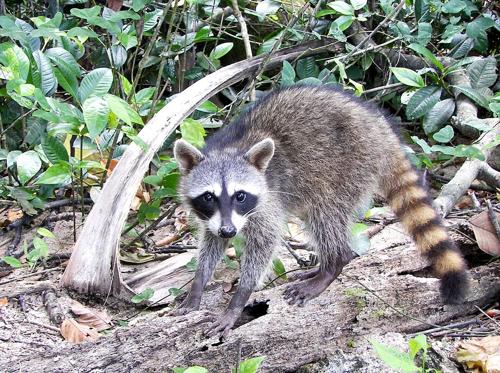 This raccoon species is very rare, as it lives in a limited area, namely on the small island of Cozumel in the Caribbean. The Cozumel raccoon is different from its other relatives due to the brownish-gray fur and the presence of a yellow tint on the tail. 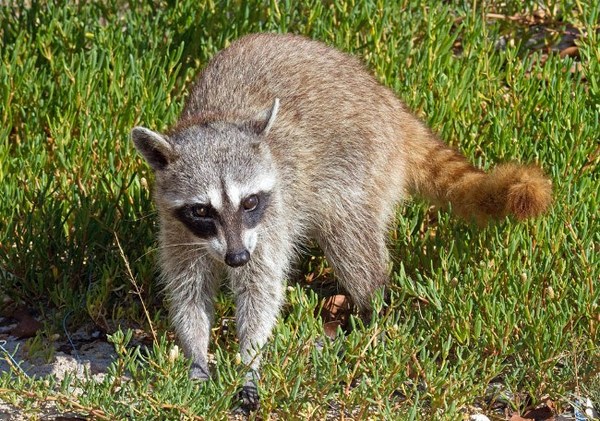 This species of raccoons is currently on the verge of extinction and is listed in the Red Book. It lives in the humid areas of Guadeloupe, preferring to settle in marshy areas, as well as near ponds, rivers, and lakes. Its appearance is similar to a common raccoon. 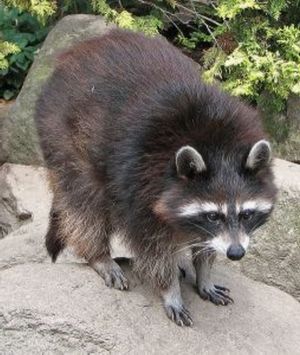 Raccoons breed strictly once a year, during their mating season, which occurs either at the end of winter or the beginning of summer (depending on the raccoon’s habitat, the farther south it lives, the faster the mating season begins).

These animals do not have special mating rituals, everything is extremely simple – the male finds the female by smell and mates with her. The pregnancy of a female raccoon lasts 2 months. Childbirth takes place in some secluded place; usually, it is a hollow of a tree or an abandoned hole of another animal.

From 3 to 8 small raccoons are born at a time. Raccoon babies, like kittens, are born blind and helpless, and at first, they are under the full care of their mother, who feeds them with her breast milk. Yet after only a month of their life, they begin to grow rapidly. By the age of 4-5 months, they are already able to independently obtain food. By the first year, raccoons reach puberty and become adults. 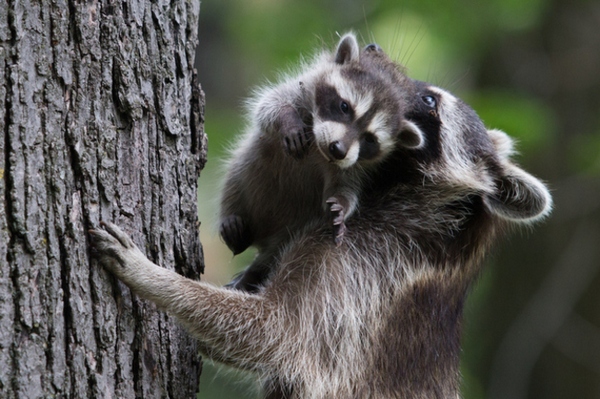 Raccoons, due to their friendly nature, can be great pets. Just don’t take a raccoon if you live in a cramped apartment, as these animals need space, and they won’t be on free-walk like cats or dogs either.

It is very desirable to allocate a separate room for a raccoon; it will also be his aviary, in which the animal will feel free. Since raccoons are very smart animals, you can have fun with them, play, but you should also be careful because if a raccoon thinks it is in danger, it can bite and scratch. Raccoons are especially aggressive during their mating season. Also during the mating season, a male raccoon can mark its territory, which will be fraught with a very unpleasant odor. However, a raccoon can be taught to walk in a tray, almost like a cat or a dog. 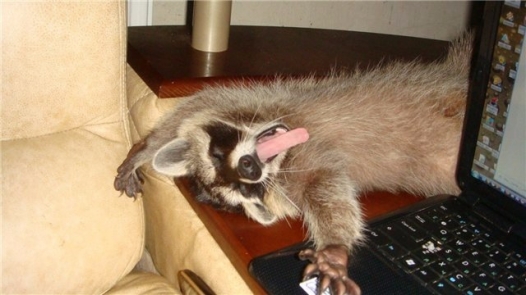 It is also worth considering that raccoons can be very mischievous, even hooligan animals, living in the house, they can, for example, smashing all the dishes in the kitchen, throwing an expensive TV, and so on. To avoid this, they should not be let out of their aviary room.

Raccoons are twilight animals, which means that having such a pet in the house, you will need to adapt to its natural rhythm, during the day the raccoon will most likely sleep, but in the evening and night it will be active. 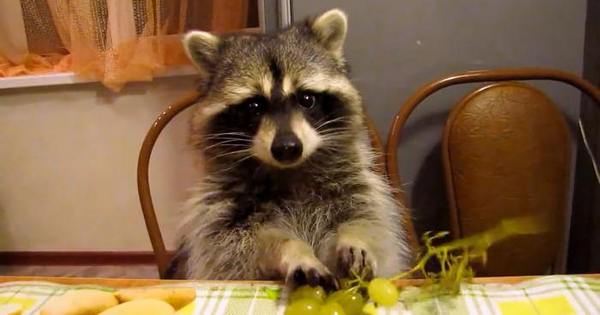 How to feed a home raccoon? An omnivorous raccoon can be fed the same as it is in the natural environment: with different berries, fruits, nuts. Besides, raccoons can be fed specialized food for cats and dogs, but the only premium. You can give meat and fish, raw and boiled, most importantly not too fat. As meat for raccoons, chicken, beef, turkey, veal, and rabbit are perfect. Raccoons can eat fruits: apples, pears, grapes, bananas, peaches, plums. And vegetables: carrots, fresh peas, asparagus, zucchini.