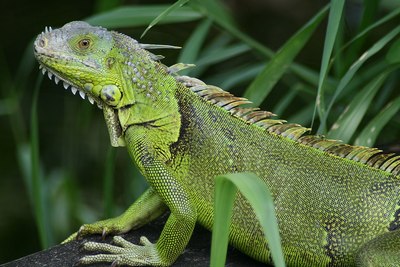 
Iguana and chameleon are the most popular pet lizards. Yet if the chameleon has some use (it is a skilled flycatcher with its long tongue), then iguanas are simply beautiful reptiles (although, beauty is a relative term). What are the habits of iguanas? Where do they live? What do they eat? Read about all this further.

Like other lizards, all iguanas have scaly skin. The scaly skin depends on the type of iguana and can have different sizes and colors. Like chameleons, iguanas can change their color, though they do this not so easily and naturally as chameleons. An iguana’s color depends on the ambient temperature; if it is colder, the iguana darkens. On the contrary, as the temperature rises, the iguana becomes brighter. 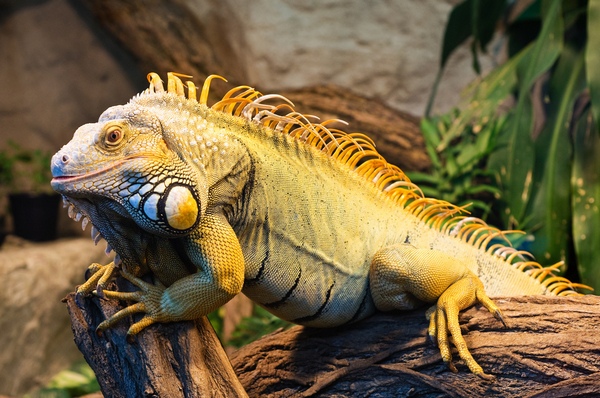 Different species of iguanas have different colors. Usually, the color scheme for them is created by nature in such a way as to mix in with the surrounding landscape, so iguanas living in the jungle are usually green, with all possible shades of green.

How to distinguish an iguana from other lizards? Indeed the iguana similar to other representatives of this vast zoological family. A characteristic feature of the iguana is the presence of a prickly ridge on its spine. This prickly ridge serves not only for beauty but also for protection. 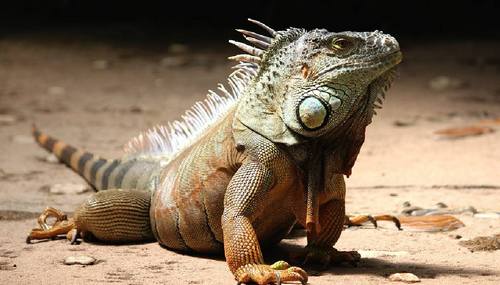 The iguana has a thin spine and a flexible body. An iguana’s body is flattened on its sides so that it can easily climb even into very narrow crevices.

An iguana’s tail is 2-3 times bigger than its body. The tail is equipped with well-developed muscles and also helps the iguana to move. Like other lizards, the iguana can throw off its tail in case of danger. The lost tail will grow again over time.

An interesting fact: an iguana’s eyes can see even when closed. This is because the iguana simply physically cannot completely close its eyes – its lower eyelid has a special hole that prevents the eye from closing. 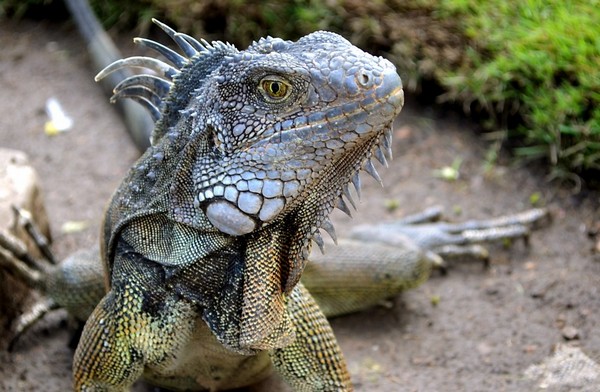 An iguana’s teeth are similar in structure to human teeth; they can regenerate. If for some reason the iguana lost a tooth, then after a while a new one will grow.

An iguana’s tongue is endowed with an amazing ability – it can distinguish not only taste, but also … smells. As a result, all iguanas have an excellent sense of smell because for orientation in the world of smells they have two organs: nose and tongue.

An iguana’s paws have sharp claws that serve for self-defense, also with their help iguanas can move on different surfaces and even climb a tree if there is such a need. 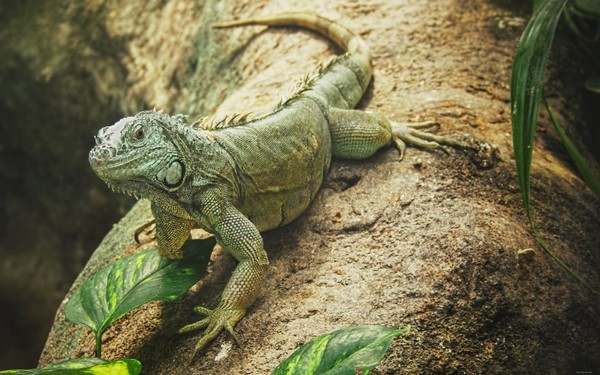 How long do iguanas live? The lifespan of an iguana varies from 4 to 40 years, depending on its species. Moreover, iguanas often live longer at home than in nature, where they are threatened by various predators.

To extend the lifespan of such an exotic pet, it is important to provide the iguana with the right care, which we will discuss later in the article. 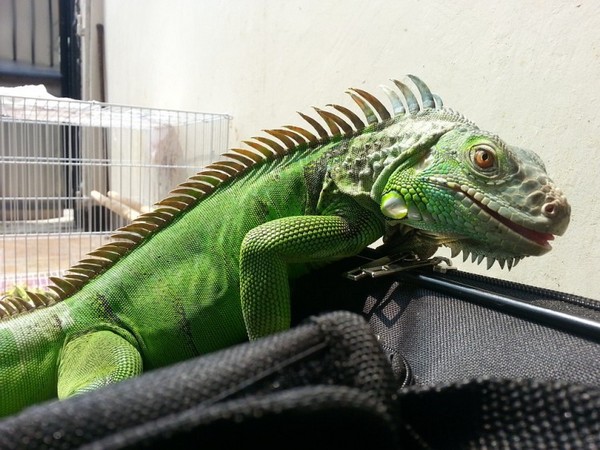 Where do iguanas live? The natural habitat of these lizards is the tropical jungle of South and Central America and some coastal islands. Actually iguanas are some of the largest lizards found in the Americas. An exception is the Madagascar iguana, which lives on Madagascar Island, near Africa. All iguanas love warmth, so a humid and warm tropical climate is ideal for these creatures.

What do iguanas eat? Iguanas are herbivores; the main source of their food is various plants, flowers, sometimes even cacti. If you have an iguana at home, you can feed it with fruits, vegetables, herbs, and mineral supplements. It is important to provide an iguana with the amount of calcium and phosphorus it needs. 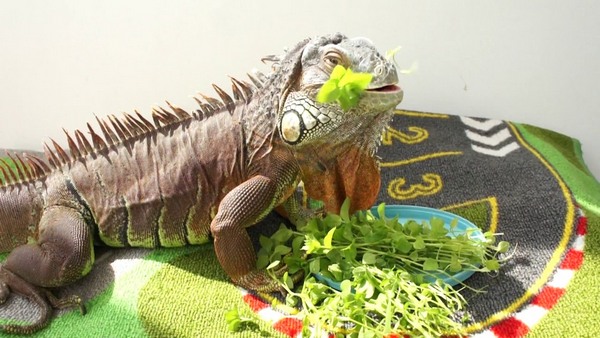 Iguanas can become the prey of some dangerous predators living in South America: the anacondas, jaguars. To protect themselves, iguanas prefer to hide. Once discovered, they flee, sometimes sacrificing their long tail, which distracts the predator’s attention, giving the lizard a chance to save its life.

Iguanas have a diurnal lifestyle; they sleep at night and are awake during the day. They choose secluded places in the thickets, on the banks of rivers and lakes as habitats. Tree iguanas live on trees. A lot of edible plants nearby, the proximity of water and a minimum of predators – these are ideal living conditions for the iguana. 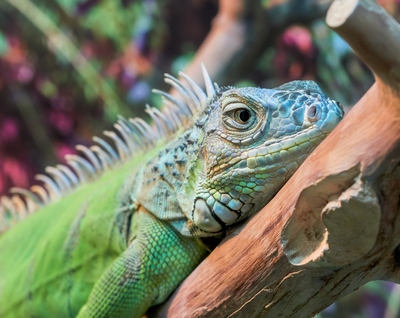 Iguanas, like many other animals, have many different species. We will describe the most interesting of them.

The blue iguana is the rarest and at the same time is the most beautiful representative of the iguana family. It has 1.5 meters (4,9 feet) in length and a characteristic blue color. In natural condition, the blue iguana lives only on the island of Grand Cayman in the Caribbean. The blue iguana is on the verge of extinction and is listed in the Red Book. 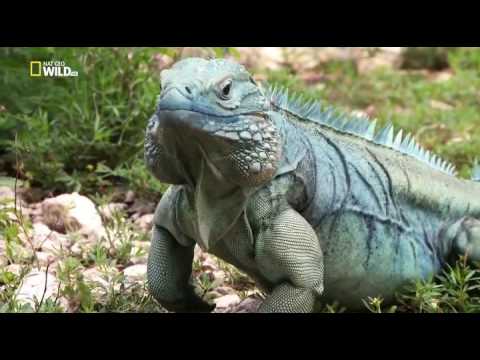 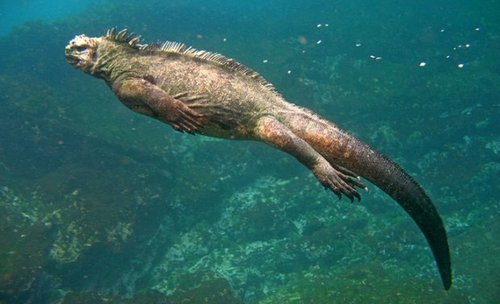 The green iguana is the most common type of iguana that lives in many places in South and Central America. In particular, the green iguana can be found in Brazil, Colombia, Venezuela, Costa Rica, Guatemala, and other countries in this region. The green iguana has a characteristic green color that helps to remain as inconspicuous as possible in the tropical jungle. 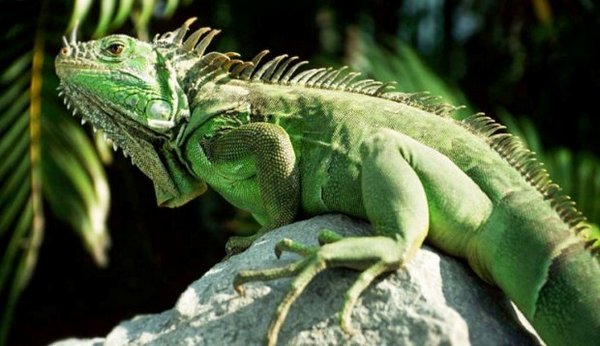 The collared iguana is notable for being the smallest among iguanas (but not among lizards); its length is only 35 cm (1.2 foot). The collared iguana has a rather funny appearance: a barrel-shaped body with a long tail and short legs. It lives in the rocky and arid regions of Mexico. 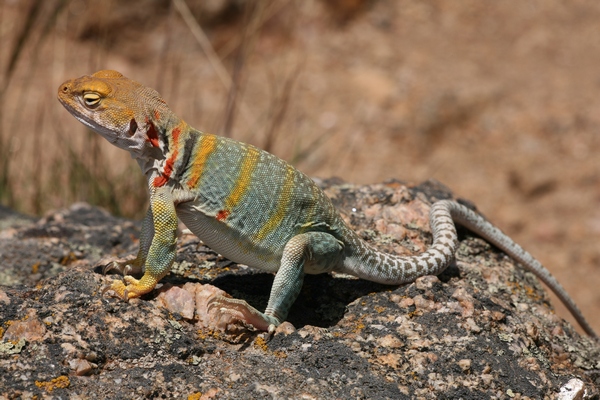 Iguanas reach the age of maturity in the second or third year of life. During the mating season, which lasts depending on the species, either in the fall or in January-February, males begin an active search for females for mating. They are mainly looking for them by smell. When several males pretend to one female, the fierce fight begins between them, during which the males enthusiastically beat each other with their long tails. During the mating season, the natural peacefulness of iguanas is replaced by a thirst to leave offspring. As a rule, the female goes to the strongest male.

Sometime after being fertilized, the female iguana lays eggs. Usually up to 6 eggs can be laid in one clutch. Small iguanas will hatch from them 3 months later. Baby iguanas already fully prepared for an adult and independent life. 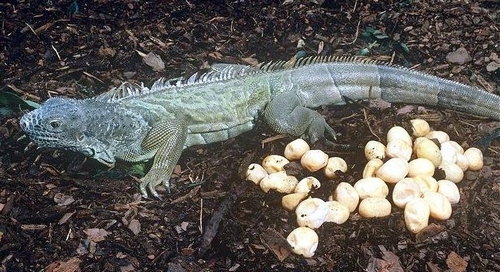 Since iguanas are thermophilic lizards that cannot tolerate cold, you will need to provide conditions that are as close to natural. The temperature in the terrarium for iguanas should be 28-40 C (82,4- 104 °F). Lowering the temperature below this limit, you risk “freezing” your thermophilic pets. It will be necessary to build a special heater for the terrarium to maintain the required temperature.

It is necessary to put an ultraviolet lamp on top of the terrarium. Iguanas will receive enough of the light they need to maintain their body in good condition.

Since iguanas love not only a warm climate but also humid; to maintain humidity in the terrarium there should be a small pool filled with clean drinking water. Among other things, iguanas love to soak in the water, and a small pool for this purpose will be what you need + thanks to it, they will be able to satisfy their thirst at any time. 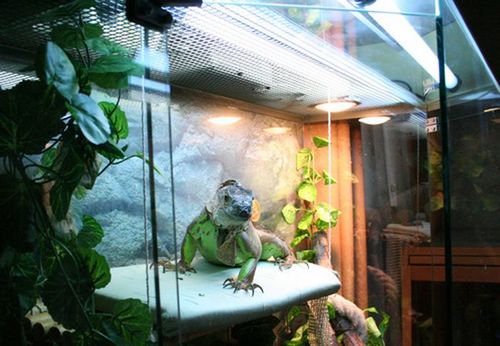 A grass rug, or even just an ordinary rug, is perfect as a cover for a terrarium with an iguana. Yet sand, stones, and the soil should not be placed there since curious iguanas can taste sand for a taste and it is not useful to their body.

Since many iguanas like to climb trees, it will also be necessary to build different snags and put wooden sticks in the terrarium.

It is also important to ensure natural ventilation in the terrarium. Without high-quality air circulation, various diseases will begin to arise in the iguana, and in the end, this can lead to death. Simple holes in the top cover won’t be enough; the best option would be a ventilation slot, tightened with a durable mesh.

Finally, the terrarium should be in a quiet place (ideally, in the library or bedroom), out of the access area of dogs and cats. 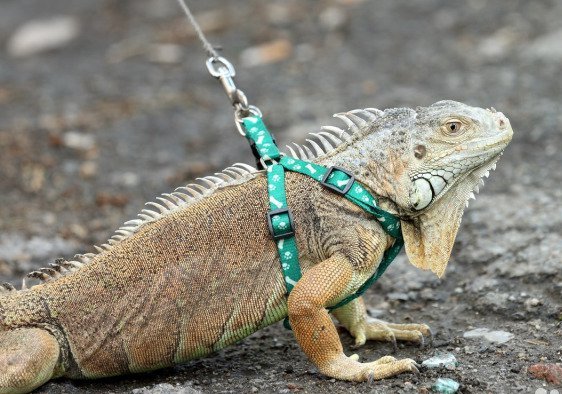 As we wrote above, the iguana can be fed with fruits and vegetables, herbs and mineral supplements. It is important to provide the iguana with the required amount of calcium and phosphorus.

If all these difficulties and numerous conditions did not scare you, then you can get an iguana as a pet.