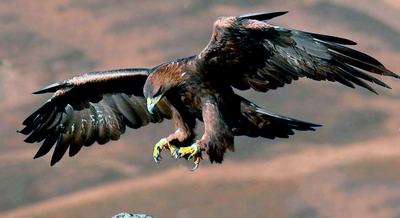 
The golden eagle bird was a symbol of courage and nobility from ancient times. The ancient Greeks personified the golden eagle (the largest of the eagles), with the supreme god Zeus himself. All thanks to the magnificent appearance of this bird, and its amazing ability to fly for hours in the air, looking for potential prey.

What do golden eagles look like? Golden eagle is a wild and predatory bird with a proud eagle posture. 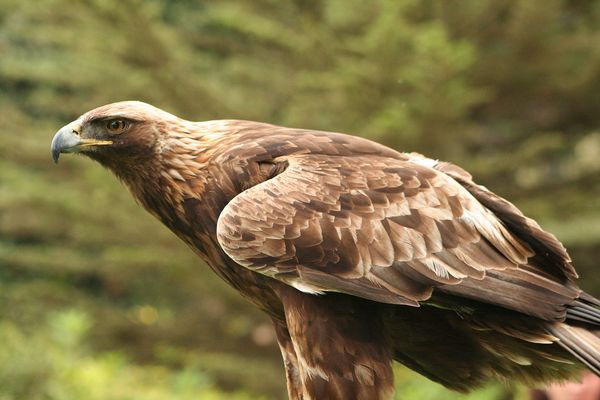 One of the biggest differences of this bird is the characteristic hook-shaped eagle’s beak. Besides this, the golden eagle has slightly elongated feathers on the neck. The golden eagle’s body is strong and powerful; its wings are long and wide. Young golden eagles are distinguished by a special curvature of the wings – they are narrowed at the beginning and have an S-like shape. Therefore, it is not surprising that these birds are excellent flyers. The golden eagle flying can have a speed of up to 320 km per hour. 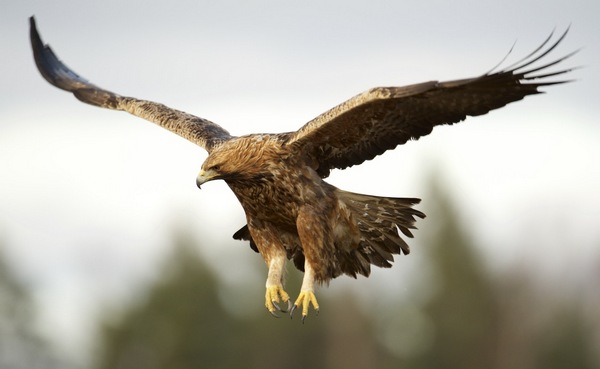 The golden eagle in flight.

The eyes of a golden eagle are dark brown, the beak is brown, and the legs are bright yellow. 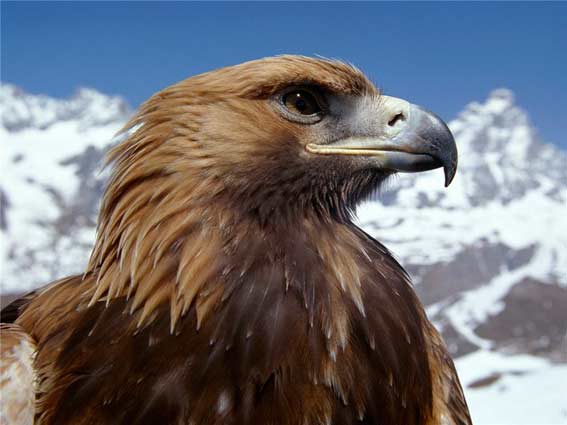 The voice of golden eagles is somewhat reminiscent of a dog barking, but in general, it is typical for eagles – sonorous. The golden eagle is a laconic bird, screaming only during mating flight, communicating with chicks and protecting its territory.

As for the color of this bird, usually adult golden eagles of brown or black-brown colors with golden feathers on the back of the head. At the same time, males and females have the same color, but it differs among young and older golden eagles, so young birds are almost black, but with pronounced white spots on the underside of the wings. Young golden eagles gradually acquire a more “adult” color (with shades of brown and black) with age and in the process of molting.

An interesting fact: according to ornithologists, white spots on the wings of young birds indicate their youth and inexperience. They give them, in a way, an indulgence to hunt in a foreign territory belonging to one or another adult golden eagle.

How long do golden eagles live? The lifespan of a golden eagle is 45-50 years; although these birds live only in zoos for such a long time. Golden eagles (as well as other eagles) live on average up to 25 years in severe environmental conditions. 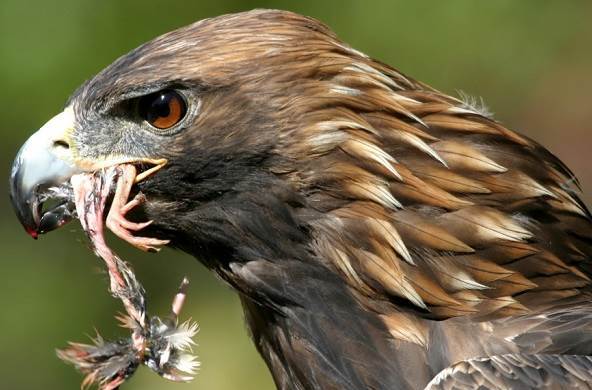 The golden eagle has to eat 1.5 kg of meat per day. However, it can starve up to 5 weeks.

Some people ask “Are Golden Eagles dangerous?”. No, they have no danger for us, humans. 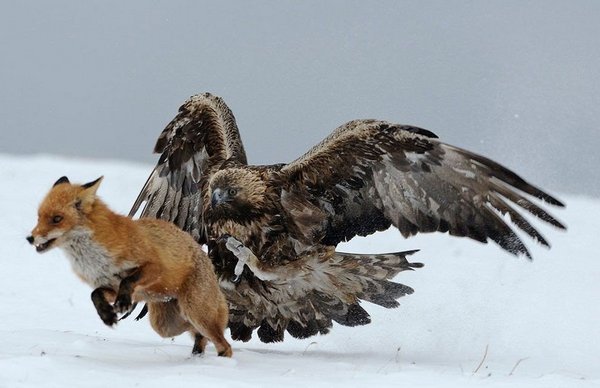 Since the golden eagle belongs to predators of a higher order, it does not have an enemy in natural conditions. It occupies the highest stage in the food chain. The only threat to him is man, and not even because he can hunt for golden eagles, but for the reason, that golden eagles do not nest in human habitats.

There are 6 main subspecies of golden eagles, which differ in the color of feathers and sizes.

The Canadian golden eagle lives in the USA and Canada. 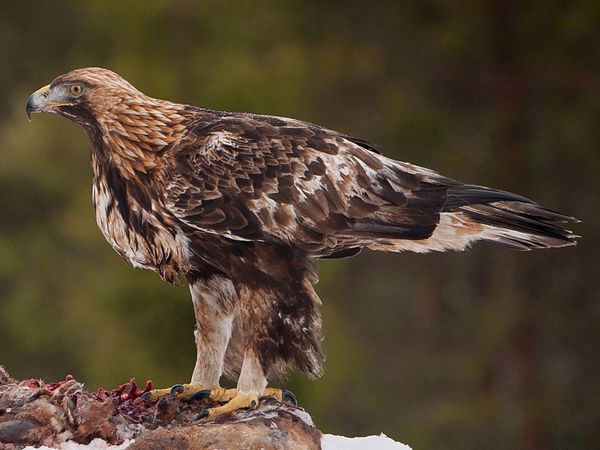 This golden eagle, which lives in the mountains of Central Asia, is distinguished by a pronounced dark color of feathers and a black “hat”. The feathers on the back of its head are brown, not golden. 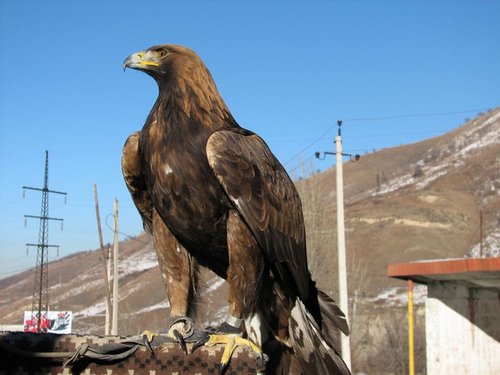 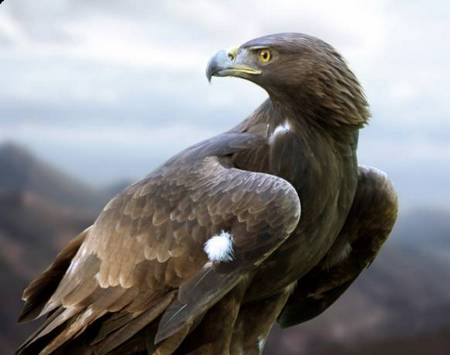 Golden eagles are monogamous birds; they remain martially faithful throughout their lives, as long as their mating partner is still alive. Interestingly, each pair of golden eagles usually has 2-4 nests in different places where they alternately fly at different times of the year.

The mating season for golden eagles begins in the period from February to April. At this time males make special demonstrative flights in front of the females: to conquer their chosen one, they perform various aerobatics. This can be, for example, a wave-like flight, when the golden eagle first gains height, and then swiftly dives down; at the lower point again gains height and so on in a circle.

The female lays eggs in mid-April. There are about 1-3 eggs in one lying. Male and female hatch them alternately for 45 days. Then chicks are born while they are a little mom feeding them, and dad brings prey. Little golden eagle chicks develop and grow very quickly, and after about six months they are separated from their parents.

From ancient times, people adopted this bird as an assistant in hunting. Although the maintenance of golden eagles in captivity is not very simple, nevertheless, unforgettable hunting with golden eagles compensates for the troubles. Young birds are usually chosen for training, gradually taming them. So the hunter puts on a leather glove, puts a golden eagle on it, and rides around the city with such an unusual pet. This is done so that the bird gets used to the voice and look of people; this is making for the golden eagle’s adaptations. 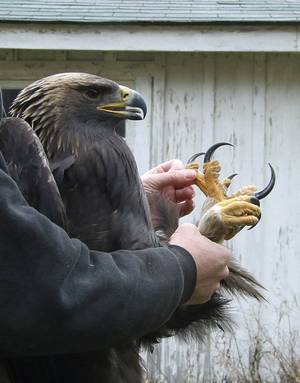