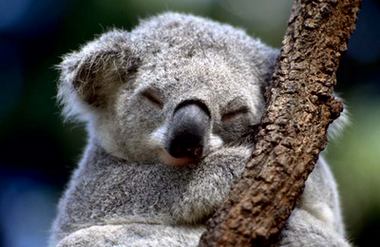 
Koalas (or Australian bears) could win the competition among the cutest animals of the world. Koala bear is so similar to the little teddy bear, so beloved by children. The word “koala” translates as “non-drinker” from one of the languages of the Australian aborigines. This name was given because koalas almost never drink water. Yet koalas drink water, but only in small quantities.

What does a koala look like? Although a koala is called a marsupial bear, or an Australian bear, due to some external similarity, it has nothing common with real bears. The koala and the bear are not even distant relatives. The koala belongs to the family of marsupials, which is represented by three types: the koalas themselves, wombats and kangaroos. The wombat is the closest relative of the koala.

A koala’s appearance is very unusual: fur is short and thick, usually gray, smoky colors, but there are koalas with brown shades. A koala’s belly is always white. 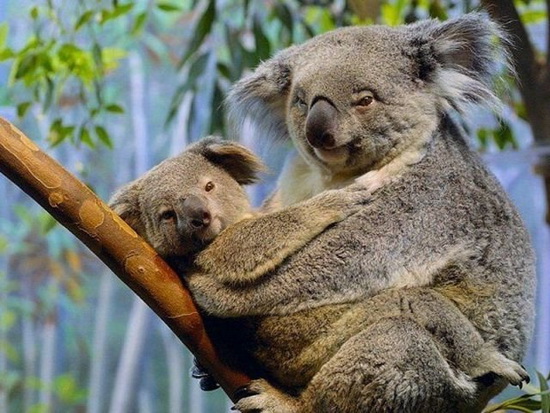 A koala’s eyes are small and blind-sighted; its vision is weak. A koala’s weak eyesight is compensated with excellent hearing and smell. A koala’s large ears are located at the edges of its head and are covered with fur. The koala also has a large, flattened black nose.

A koala’s teeth are ideal for eating plants; however, all marsupials, including wombats, have the same tooth structure.

Since koalas live mostly in trees, they have tenacious front paws with long claws. Each koala’s forepaw has two thumbs and three standard toes with three phalanges. Thanks to its tenacious front paws, koalas easily cling to branches of trees; they eat, rest and even sleep in this position. 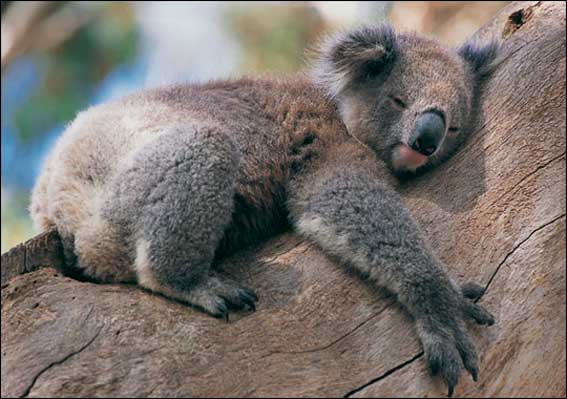 Koala on a tree.

Does a koala have a tail? Yes, but a koala’s tail is so short that it is almost not noticeable under the hair. 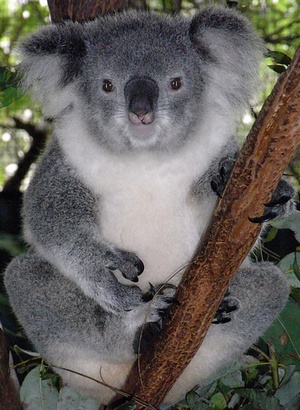 Where do koalas live? All koalas, as well as, in general, the whole family of marsupials, lives only on one continent – in Australia.

The discoverer of Australia, the famous English sailor James Cook, did not find a koala, despite the fact that there were plenty of koalas at his landing site. An English naval officer, Baralie was the first of the Europeans who saw these unique animals. He sent the dead koala to the governor of New South Wales in 1820, and a living koala was caught for the first time a year later.

What do koalas eat? Koalas are vegetarians. The main source of their food is the shoots and leaves of eucalyptus. Koalas have no food competitors since eucalyptus leaves are not interesting for other herbivores animals because they contain little protein and have prussic acid. Yet not all leaves and shoots are suitable for koalas even among eucalyptus trees. Koalas can select the least toxic among them thanks to their well-developed sense of smell. Koalas eat only 120 of the 800 eucalyptus species found in nature. 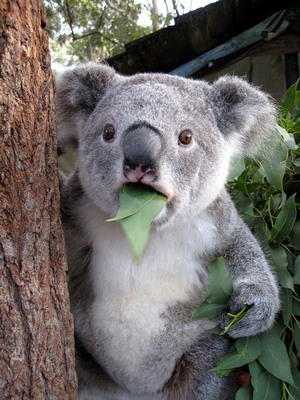 The koala eats from 0.5 to 1.1 kg of leaves during the day. Sometimes they can eat ordinary soil, so they compensate for the lack of certain minerals in the body.

As for the name of the koala – “non-drinker”, it is justified, since all marsupial animals consume very little moisture. Koalas usually have enough morning dew and moisture present in eucalyptus leaves to satisfy their thirst. Yet during periods of illness or drought, koalas can drink water from various freshwater sources, as all other animals do.

All koalas are nocturnal, they sleep peacefully on the branches during the day, while at night they climb these very branches in search of food. In general, the koala is a very calm, good-natured, phlegmatic animal. Koalas prefer to live separately; each koala has its territory, and if the borders of this territory are violated by another koala, then the koala’s peacefulness can be replaced by aggressive behavior.

Koalas are usually friendly to people; it is easy to tame them. There are many koalas nurseries in Australia, where you can easily stroke a koala. 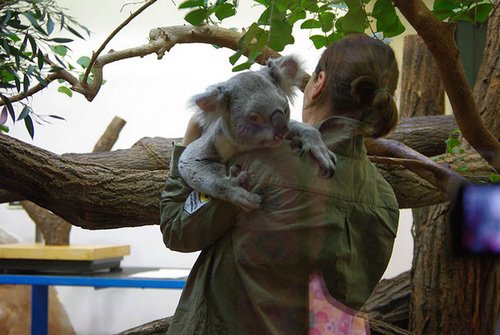 Koalas practically have no enemies under natural conditions since even wild dogs dingoes avoid koalas because of their bright eucalyptus smell.

In fact, koalas are represented by only one species, it is conditionally koala, Australian, and it is described in our article.

The mating season for koalas begins in October and lasts until February. Female koalas begin to select their love partners during this period. The larger the koala male, and the louder he can scream, the more attractive he will be for females. It is also very interesting that there are fewer males among koalas than females, and one male usually fertilizes three to five females per season.

Pregnancy of a koala female lasts 30-35 days. Then a single baby koala is born. Twins can be born in very rare cases. Pregnancy in the female koala can happen only once every two years. A newborn baby koala is naked, devoid of fur, and at first, they are under the watchful care of their mother, they drink breast milk and sit in a bag like kangaroo cubs. 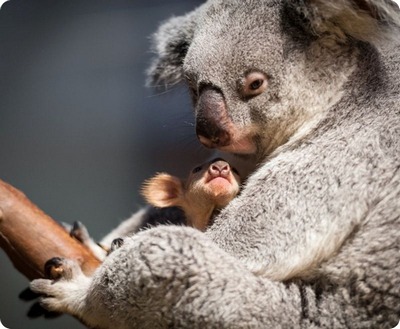 Slightly matured, small koalas begin to climb on the mother’s nape, clinging to the fur. A year later, they are already ready for adulthood; but they stay with their mother even for two or three years. Only after reaching puberty, in the second or third year of life, they leave the mother forever to become independent adult koalas.

In spite of their peaceful nature, it’s not a good idea to keep a koala at home, or rather, it is simply not possible due to the feeding habits of these animals. As we wrote above, koalas eat leaves and shoots of eucalyptus, but unfortunately, they are not capable of digesting other food. Yet even among the leaves of eucalyptus, koalas eat only 120 varieties of 800, and it is hard to determine which leaves fit koalas, and which do not. For this reason, koalas can live only on their natural territory in eucalyptus forests. 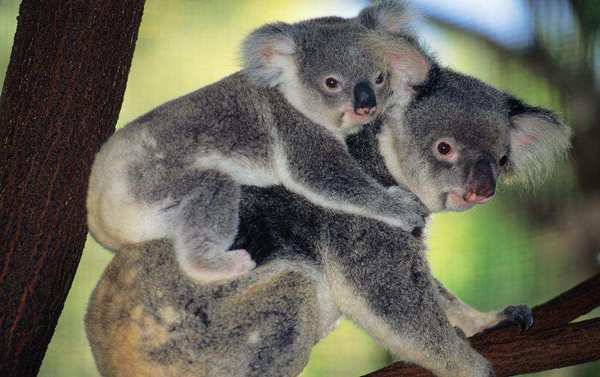