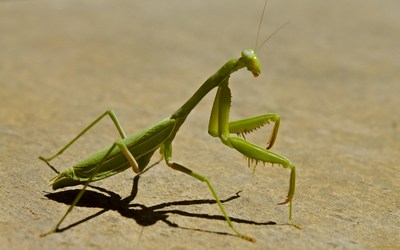 The praying mantis is one of the most amazing and strange insects on our planet, both with its habits and its way of life, some features from which can slightly shock us, people. Yes, we are talking about the famous marriage habits of praying mantis, when the female praying mantis after the mating process (and sometimes even during the process) eats its hapless cavalier. Yet, praying mantises are not only interesting by these habits, and in our today’s article, we will tell you all interesting fact about these unusual insects.

Back in 1758, the great Swedish naturalist Karl Liney gave the praying mantis its scientific name. He paid attention to the fact that the pose of the praying mantis which was in ambush and guarding prey is very like to the pose of a man who folded his hands in prayer to God. Because of such similarity, the scientist gave the insect the Latin scientific name “Mantis religiosa”, which literally translates as “religious priest”.

Although it is not called so everywhere, praying mantis has other, not so good names, for example, in Spain it is called “Caballito del Diablo” – “the horse of the devil” or simply – “Muerte” – “Death”. Such terrible names are in connection with some of their terrible habits. 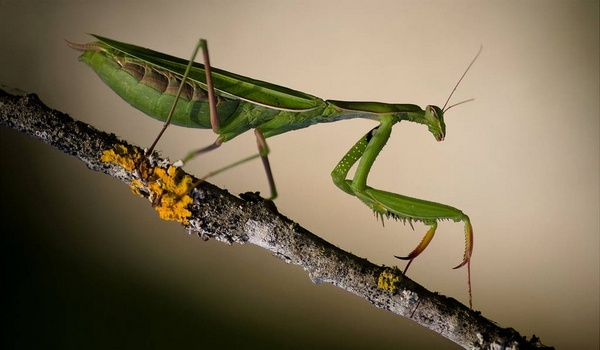 The structure of the praying mantis is characterized by an elongated body that distinguishes it from other arthropod insects.

The praying mantis is the only living creature that can easily turn its head 360 degrees. Thanks to such a useful skill, he can see the enemy approaching from behind. And he has only one ear, but despite this, a great ear.

Praying mantis eyes have a complex facet structure, located on the sides of the head, in between to them, it has three more simple eyes over the base of the antennae. 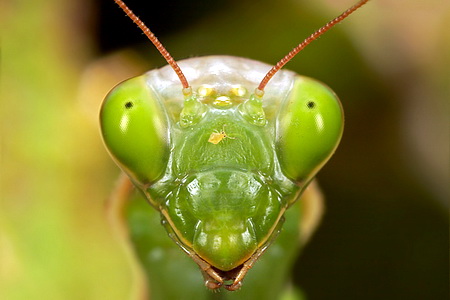 Praying mantises, almost all their species, have well-developed wings, but only males can fly, females, because of their greater weight and size, fly more difficult than males. Praying mantis wings consist of two pairs: the front and the back, and the front serve as a kind of wing covering that protects the rear wings. Also, wings usually have bright colors, and sometimes they even have peculiar patterns. However, among the many varieties of praying mantis, there is such an earthen praying mantis (the Latin name is Geomantis larvoides), which has no wings at all. 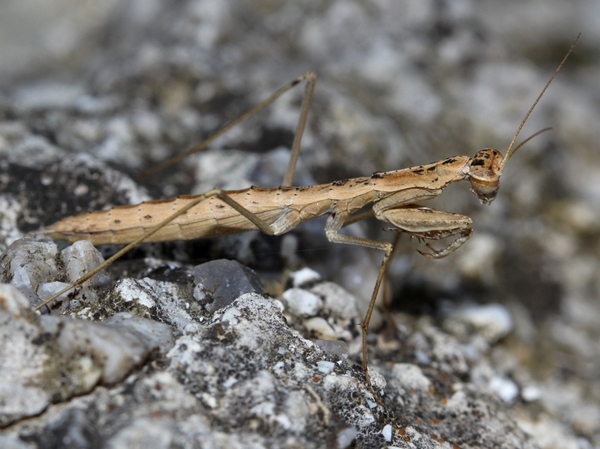 Praying mantis forelimbs are well developed, having difficult structure – each of them consists of many parts: trochanters, hips and legs. Spikes are present on the lower leg of the praying mantis, which at the end is decorated with a sharp, needle-like hook.

Mantis keeps their prey just between the thigh and the shin until their meal is over.

The mantis blood circulation is primitive, but it has its own reason – an unusual respiratory system. The mantis is supplied with oxygen by a complex system of trachea connected with stigmas on the abdomen in the middle and back of the body. In the trachea, there are airbags that increase ventilation of the entire respiratory system.

The type of mantis, called in Latin Ischnomantis gigas and living in Africa can reach 17 cm in length, perhaps, this representative of the praying mantis is a real champion in size. 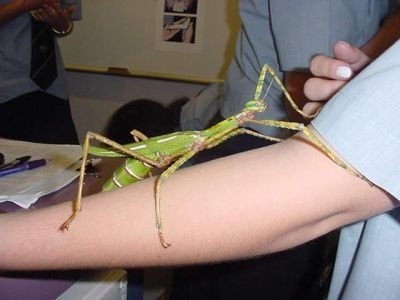 Heterochaeta orientalis or Eastern Heterocheta is second biggest praying mantis (after Ischnomantis gigas). It reaches 16 cm in length. Ordinary praying mantises have much smaller sizes, on average no more than 0.5-1.5 cm in length. 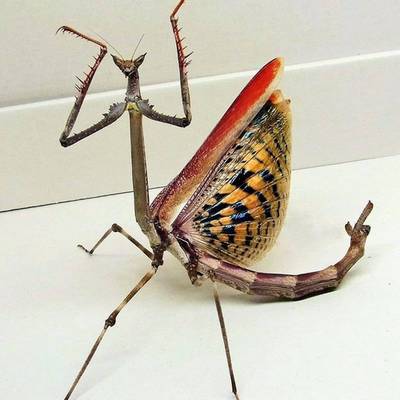 What color is praying mantis? Like many other insects, praying mantis change colors and have excellent camouflage abilities, this biological method of protection against predators, and because of this, their colors have green, yellow and brown tones, depending on the environment. Green praying mantises live on green leaves, while brown ones are inseparable from the bark of trees.

Mantis lifespan on average is about a year. We must remember that the females mantis live longer than the males mantis.

It is no secret that praying mantis is a notorious predator, it loves to feed on both smaller insects and it is not afraid to attack prey bigger than itself. They eat flies, mosquitoes, bees, wasps, bumblebees, butterflies, beetles, etc. Large members of the praying mantis can attack even small rodents, birds and small amphibians: frogs and lizards.

Praying mantises are usually attack from ambush, suddenly grab prey with their front paws and do not let it go until it eaten. Strong jaws allow these gluttons to eat even a large prey. 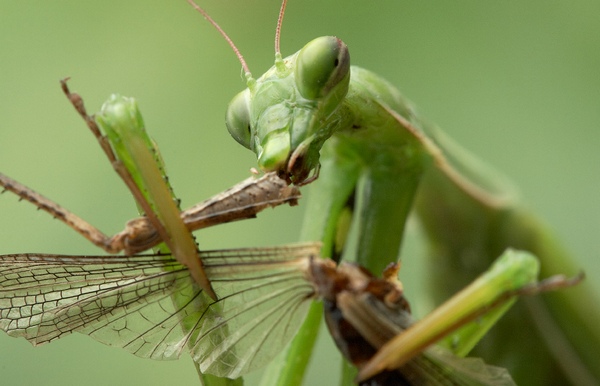 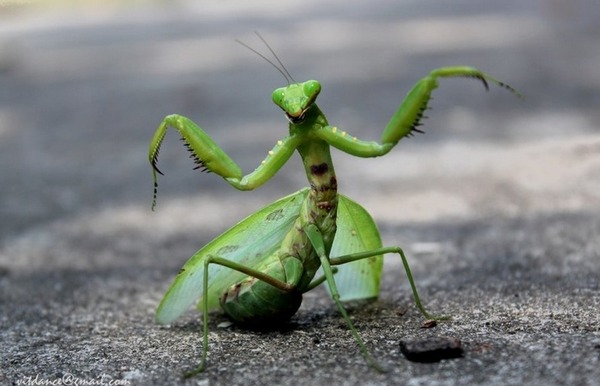 Praying mantis lives almost everywhere since their habitat is very wide: Central and Southern Europe, Asia, North and South America, Africa, Australia. Mantis feels great in rainforests, and in the steppe regions, and in the rocky deserts.

They rarely move from place to place, preferring their usual habitat to unknown distant places, the only reason capable of encouraging them to travel is the lack of food supply. 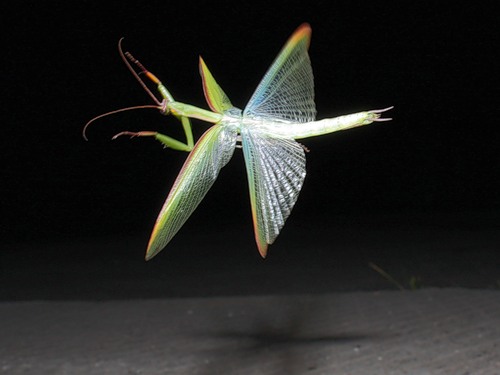 Praying mantis is not dangerous for humans. He doesn’t have any poison like snakes, tarantula or some other really dangerous insects. 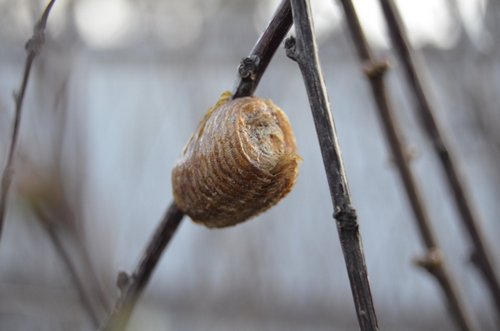 Scientists have counted about 2000 different species of praying mantis, we, unfortunately, cannot bring them all in our article, but we will describe the most interesting representatives.

The European Mantis lives in most countries of Europe, Asia, and Africa. European Mantis reaching up to 7 cm (female) and 6 cm (male). As a rule, they are green or brown in color, the wings are well developed, at least, it is not a problem to fly from branch to branch for an ordinary praying mantis. The abdomen is egg-shaped. You can distinguish this type of mantis by the black spot, which is located on the basins of the front pair of legs from the inside. 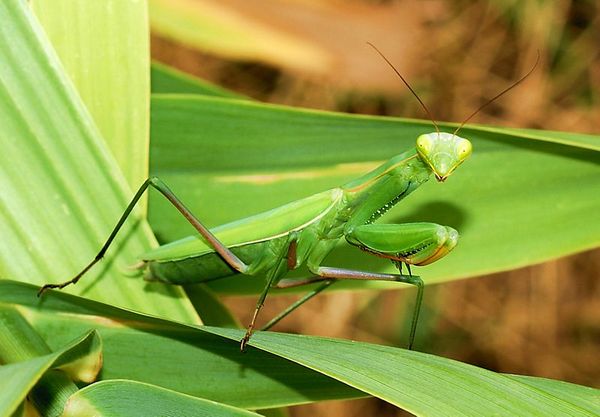 Obviously, China is the birthplace and the main habitat of this mantis. The Chinese mantis is pretty large, females reach up to 15 cm in length, but the size of the males is several times smaller. Have green and brown colors. Chinese praying mantis has a nocturnal lifestyle, while their other relatives sleep at night. Also, the young Chinese praying mantis has no wings, which grow only after a few molts, and then they get the ability to fly. 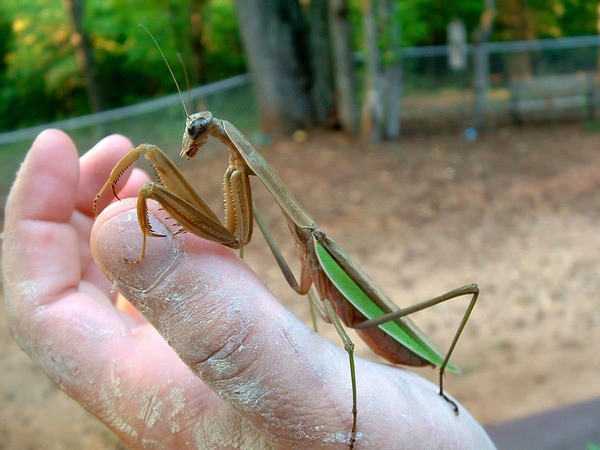 Mantis Creobroter Meleagris lives in southwest Asia: India, Vietnam, Cambodia and several other countries. Usually, reach 5 cm in length. The colors are white and cream. You can recognize them by strips of light brown color that run all over your body and head. Also on the wings, there is one small and a large spot of white or cream color. 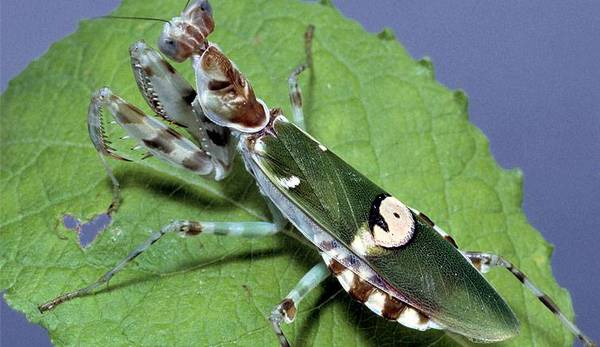 Indian Flower praying mantis especially loves the wet forests of southern India, Vietnam, and other Asian countries. This species is smaller; females grow to only 40 mm, males up to 38 mm. The body is more elongated than other relatives. And for extra protection, on the thighs of the Indian praying mantis, there are special thorns of different heights. Painted in cream colors. Representatives of this species are excellent flyers, and both males and females, due to their low weight, besides both pairs of wings are well developed. On the front wings, they have a spot, similar to an eye with two pupils, which deters predators. Flower praying mantis lives in the flowers, where they guard their prey. 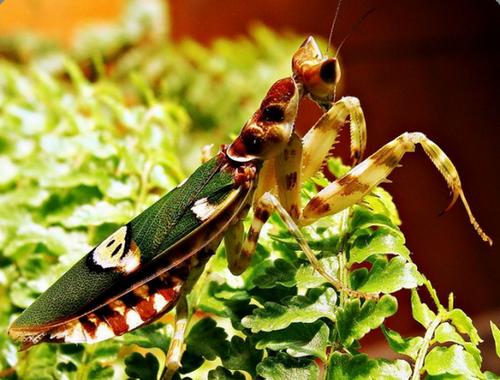 Spiny Flower Praying Mantis lives in countries of southern and eastern Africa. By way of life, size, very similar to the Indian Flower praying mantis. But its coloring is especially interesting – it is really artistic, on the upper pair of wings an interesting pattern resembling a spiral or even an eye. On the abdomen of this species, there are extra spines, which gave it such a name. 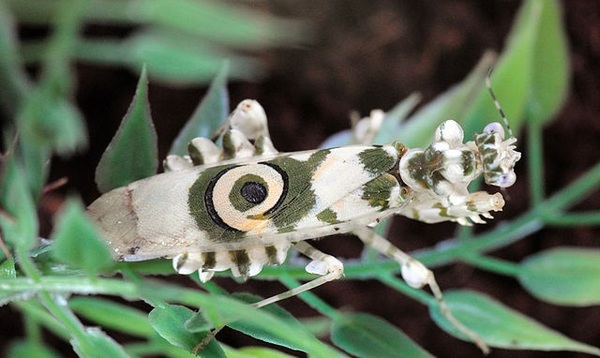 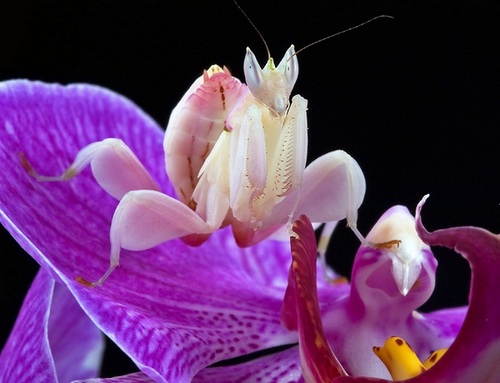 Eastern heteroheta or spiky-eyed mantis is one of the largest praying mantises in the world (the female reaches 15 cm in length) and lives in most of Africa. These praying mantises live in the branches of bushes.

And here we go to the most interesting part – praying mantis reproduction. Males of the species in the onset of the mating season (usually in the fall) and with the help of olfactory organs begin the search for females ready for mating. Finding her, he performs a special “marriage dance”, which changes him into the rank of sexual partner. Then the mating process itself begins, during which, the female mantis has a bad habit of biting the males head off and then completely eating him. 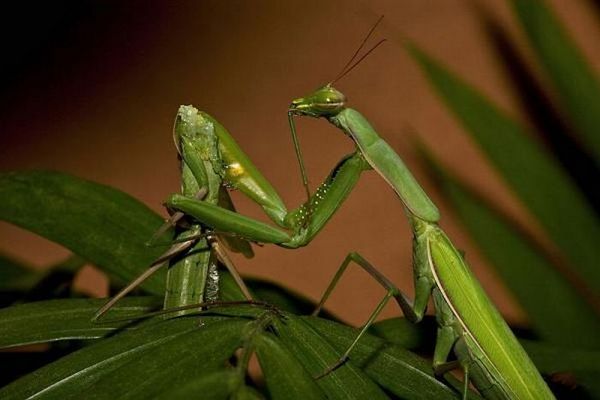 Why does female praying mantis eat male? Some scientists believe that this behavior, which is more than terrible in our opinion, has its own biological causes – by eating her “husband” the female praying mantis replenishes the reserves of nutrient protein substances necessary for future kids.

Although it also happens that the male praying mantis manages to get away from his “damsel” and avoid the sad fate of food.

After some time, the fertilized female praying mantis lays eggs, while enveloping them with a special sticky secret, which is allocated in their special glands. This secret serves as a kind of protective capsule for future praying mantis eggs and is called an oteca. How many babies does praying mantis have? The fecundity of the female depends on her species; usually, the female is able to lay 10 to 400 eggs at a time.

What do praying mantis eggs look like? See the picture below. 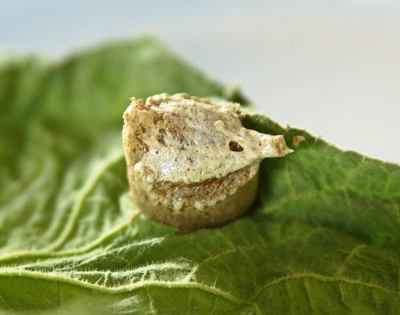 In the eggs, the praying mantis nymphs stay from three weeks to six months, after which they crawl out of the eggs. Further, their development goes at a fast pace and after about 4-8 molts the nymphs transform into an adult praying mantis. 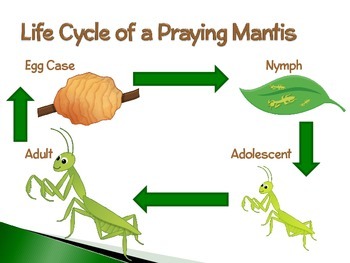 It would be a very exotic and unusual act to have a praying mantis in house. Yet, there are people who have these “pets” and if you also want to join them, then, the first thing you have to take care of is a terrarium. A small glass or plastic terrarium with a mesh lid will do; its size must be at least three times bigger than the size of the praying mantis itself. Inside it would be nice to place the twigs or small plants, on which the praying mantis will climb like trees.

Praying mantis is heat-loving insects, so the best temperature for them will be from 73,4 to 86 °F. You can use special heaters for terrariums.

Also do not forget about the humidity, which is also important for these insects. The optimal humidity for praying mantis is 40-60% and to maintain it you can put a small container with water inside the cage. 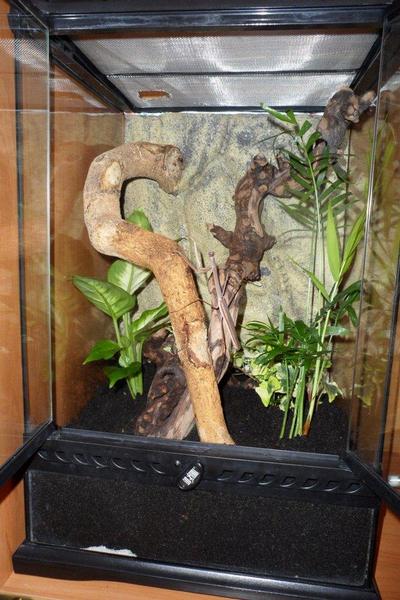 What to Feed Praying Mantis

The best option would be to feed your praying mantis with live food: crickets, grasshoppers, cockroaches, flies. Some species of praying mantis will not mind eating ants. And you’ll need to feed them regularly, so to keep such “pets” can be somewhat troublesome. Yet, the praying mantis doesn’t need water, since it receives the necessary body fluid from food. And good news – it is not necessary to feed them every single day (feeding them every day can be even worse for some mantis species). It would be enough to feed them three-four times a week.

And at the end, we bring to your attention an interesting popular science film about praying mantis.