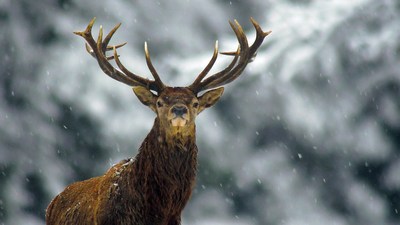 The deer is considered a sacred animal among Indian tribes. “If you meet a sacred deer in the forest, happiness and good fortune will await you” – say many Indian legends. Hunting a deer was a serious crime for the Indians of America. Unfortunately, we can’t say the same about white peoples. Nevertheless, the deer is a wonderful and beautiful animal. Our today article is about deer.

The scientific name for the deer is Odocoileus virginianus. The deer are classified under the phylum Chordata, class Mammalia, order Artiodactyla, family Cervidae, and genus Odocoileinae.

The size of a deer differs depending on its species. For example, the largest North American deer has 0.8-1.5 meters in length, with a weight of 200 kg. While the little crested deer is only 1 meter in length, it weighs no more than 50 kg. 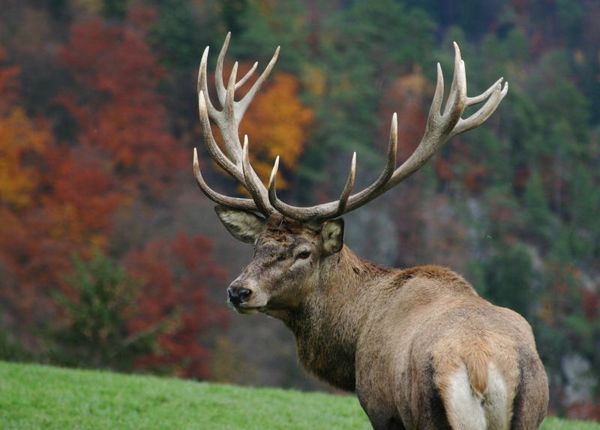 The red deer has the most slender body; it has a proportional build, a long neck, a slightly elongated head. 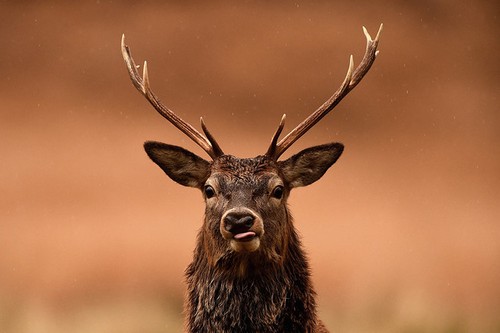 The eyes of the deer are yellow-brown in color, with deep lacrimal sulcus nearby.

Some deer have thin and graceful legs, while others have short legs, but all deer without exception have well-developed leg muscles, which serves as a means of survival for them. The deer enters into twenty of the fastest animals in the world. The speed of a deer running away from predators can reach up to 55 km per hour. 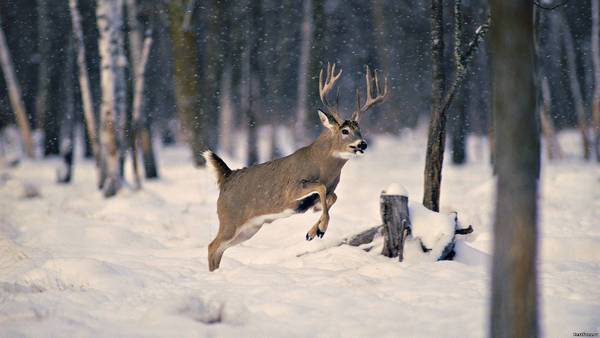 The teeth of a deer are bright indicators of its age. A good zoologist will easily know how old the deer is according to the condition of its teeth.

The skin of the deer is covered with fur, which can be both thin in the summer, and thick and warm in the winter. The fur color is usually brown, gray or red.

An interesting fact: many deer species shed their old antlers about once a year and in their place, new ones immediately begin to grow. A deer’s antlers are made up of cartilage, and then overgrown with bone tissue; the speed of their growth depends on the diet of the deer. 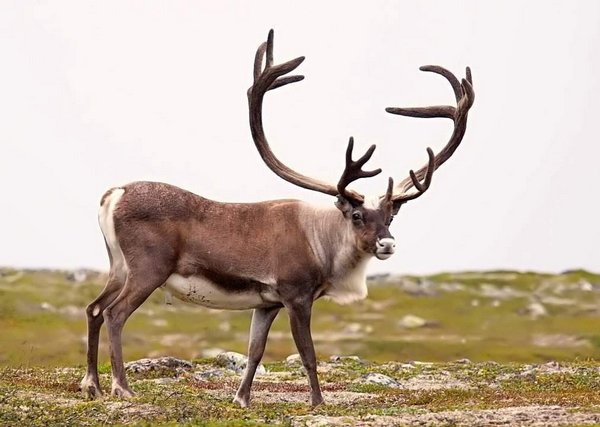 A deer’s antlers serve for protection and for attacks. You may ask: “why a peaceful deer would attack someone?” In fact, male deer often arrange battles between each other because of a female, during which they actively use their antlers. The female gets the winner with the strongest antlers. Besides this, some deer use their antlers to dig up snow in order to get moss and lichen that serves as their favorite food. 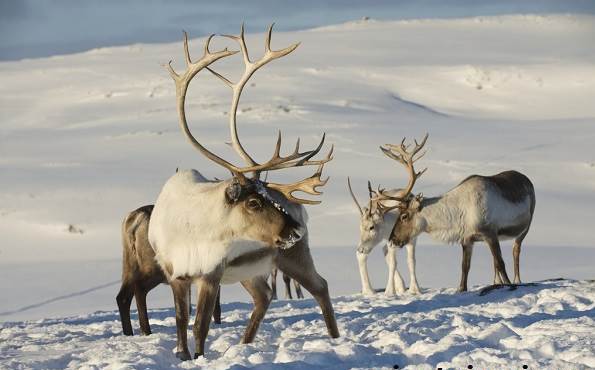 Where do deer live? Deer live in the plains and mountainous areas, in the cold tundra and in the equatorial belt, they can be found in many places of our planet. Deer live in many countries of Europe and Asia, North and South America. Some deer live in Africa, Australia, and New Zealand. 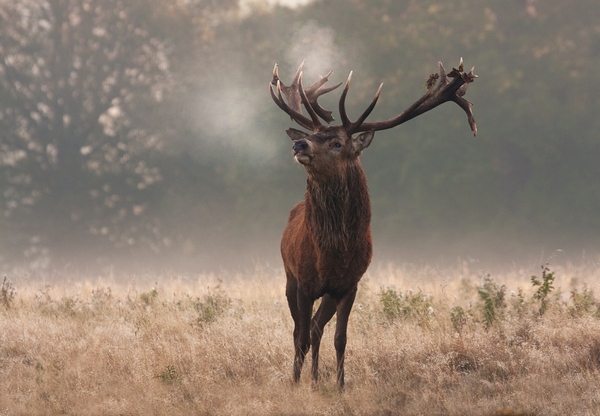 Since a deer is an herbivore, its diet depends on the places in which the deer lives, more precisely on the vegetation of those places. Many deer eat leaves, grass, branches of shrubs, and bark, which serves as a significant part of their diet. The deer will not refuse to eat some fruits: apples, pears, various berries. Deer living in the tundra love to eat moss, they dug out moss directly from under the snow.

Wolves and bears are a dangerous enemy of deer. Yet the deer can escape with the help of its muscular legs. However, a pack of wolves, especially acting in a coordinated manner, can easily catch an old or sick deer. The human hunter is also a dangerous enemy of a deer. Many hunters kill this amazing animal for the antlers, which then hang in the form of a hunting trophy somewhere near the fireplace.

Deer are nomadic animals that live in small herds of 10-30 individuals. In the summer, they prefer to settle in forests, where an abundance of various trees and grass serve them an excellent menu. In winter, they try to wander into impassable thickets, because there is the least amount of snow there and as a result greater abundance of food under relatively small snow cover. 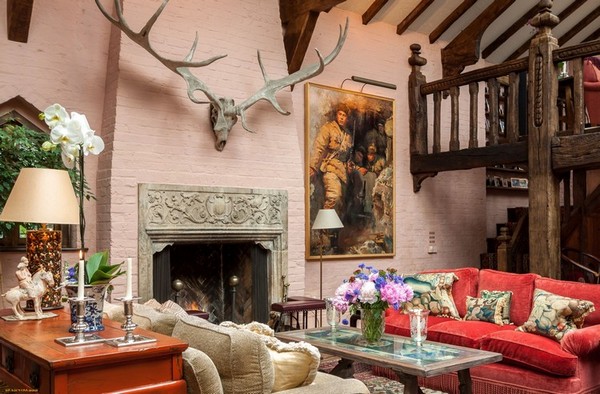 In nature, there are a large number of different types of deer. We’ll describe the most interesting of them.

The red deer is the most beautiful representative of the family of deer. It has a slender body, proportionate addition. There is a characteristic white spot under the tail of the red deer. The antlers of this species of deer are characterized by branching. The red deer inhabits a wide geographic area: Europ, China, North Africa, North and South America, and Australia. 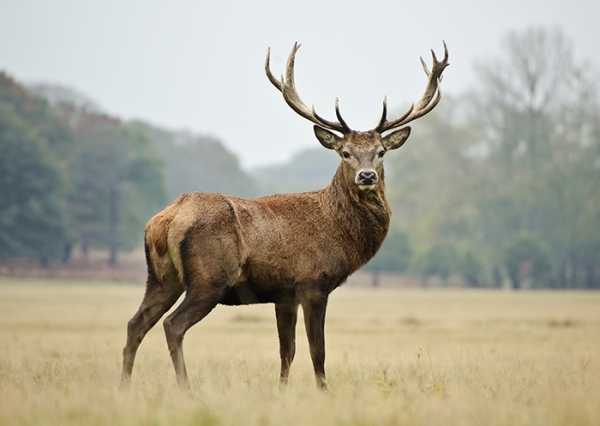 This deer that lives in the northern regions, in the tundra, is distinguished by the fact that it has antlers of both males and females. And this is not just the case, the fact is that the antlers of the reindeer females are needed for practical purposes, with their help they clear snow to get to the food under it: moss, and lichen. Besides this, the reindeer are the only ones among the deer that eat meat: small rodents, lemmings. The body length of the reindeer is 1.9-2.1 meters, weight – 190 kg. 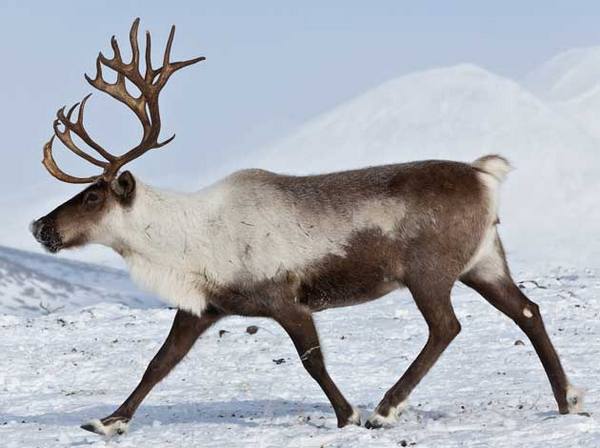 The water deer is also known as the humble deer. It is one of the smallest representatives of the deer family, its length is only 75-100 cm, and its weight is 9-15 kg. The water deer lives in forests of China and Korea. The water deer is an excellent swimmer, it can swim by several kilometers, migrating between the deltas of different rivers. 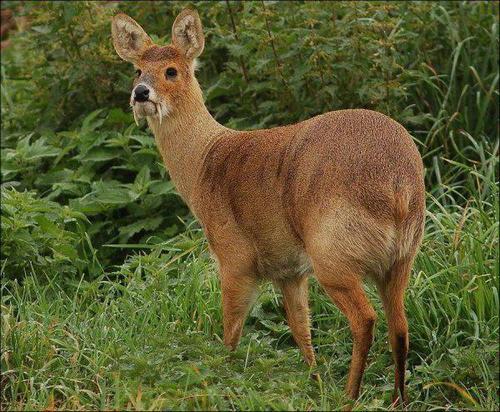 The white-lipped Deer is also known as the Thorold’s deer. This type of deer got its name due to its distinctive white coloration of the neck and front part of the head. The antlers of this deer are white. The length of the white-sided deer is 230 cm with a weight of 200 kg. These deer live in the mountainous forests of Tibet and some Chinese provinces. 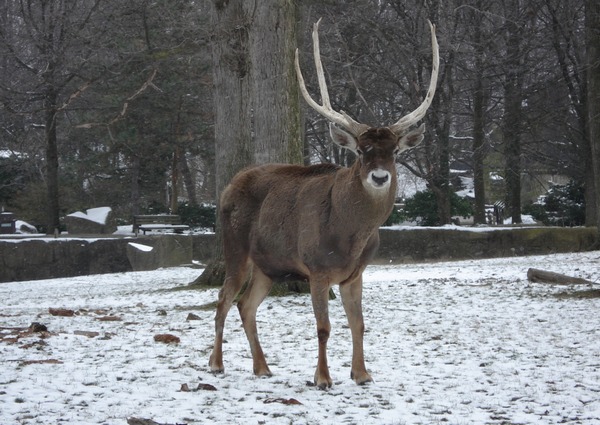 The Tufted deer has a black-brown tuft on the head. A distinctive feature of this deer is its short and not completely branchy antlers. These deer live in the forests of South and Southeast Asia. 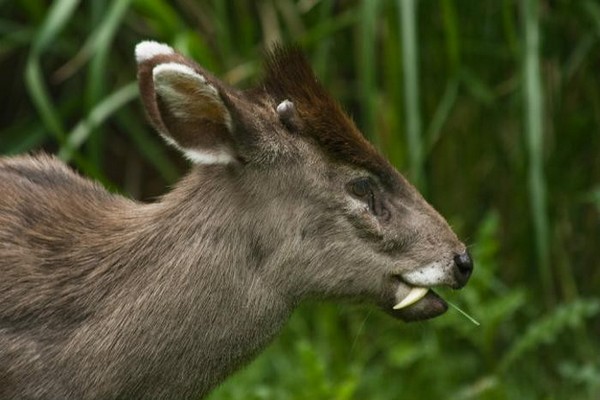 The largest population of the whitetail deer is in the USA state of Virginia. The name was due to the characteristic white color of the tail. The length of the white-tailed deer is up to 1 meter with a weight of about 150 kg. 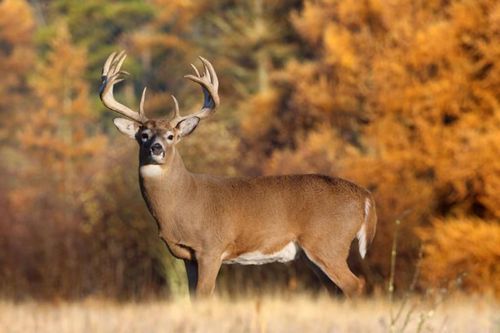 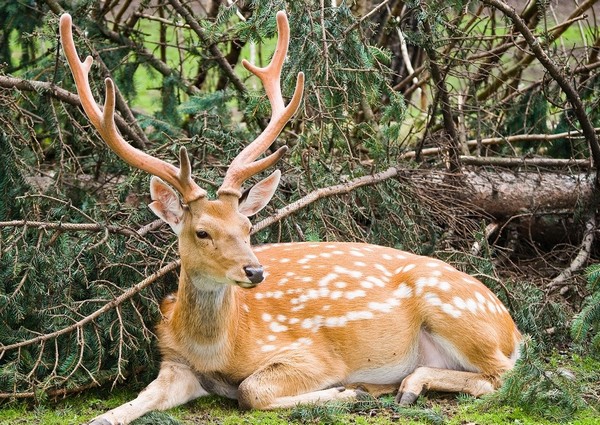 Deer have a harem and polygamous life. The herd of these animals is headed by a strong male, which mates with several females. This male deer protects his “ladies” from other competing males. In the fight for females, the male deer make the real duels, colliding with their antlers. 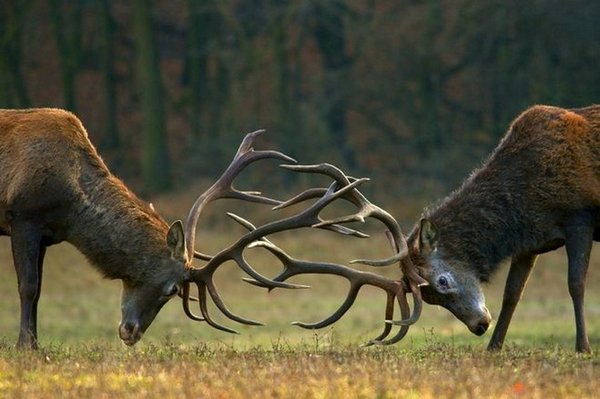 Deer reach sexual maturity early; by two years the female deer is able to give birth to the young baby deer. Males become sexually mature at 2-3 years. Pregnancy of deer lasts 6-9 months (depending on the species). Usually, only one small deer is born at a time. Only in rare cases, there can be twins. Small deer have a spotted color, which serves as an excellent disguise from predators. 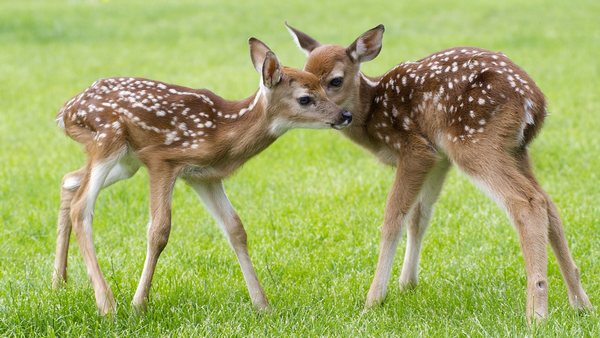