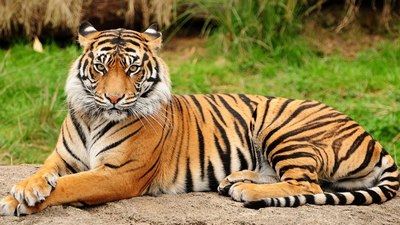 
Although the lion is considered the king of animals, it is smaller than the tiger. Yes, the tiger is the biggest predator of the cat family. This “cat” has 3 meters in length with an average weight of 250-300 kg (550-660 pounds). The tiger name meaning came to us from the ancient Persian language, which means “sharp, fast”.

What does a tiger look like?Tigers have a flexible and muscular body with a round head and a convex forehead. A tiger’s eyes are able (like people) to distinguish colors and see in the dark (in general, the ability to distinguish colors is very rare in the animal kingdom). In addition to good vision, tigers also have excellent hearing and smell. They can pick up the slightest sounds and subtle smells. All this makes the tiger into one of the most dangerous predators of our planet. 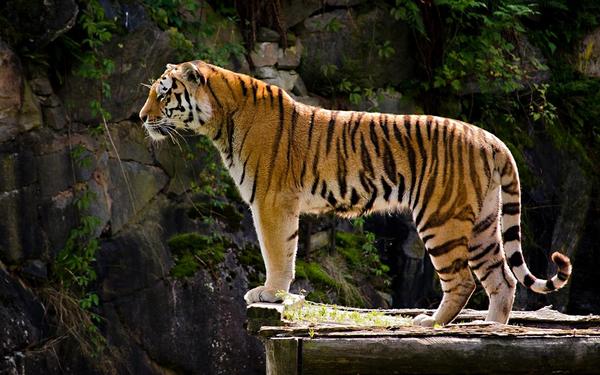 As we wrote at the beginning of the article, tigers reach a size of up to 3 meters in length and weigh up to 300 kg (660 pounds). Yet their size may vary depending on the type of tiger. The Bengal and Amur tigers are the biggest. Female tigers are usually slightly smaller than males.

There is an elastic white mustache on the face of the tiger. Besides this, an adult tiger has 30 teeth (with which they survive the food) + four sharp fangs, two from above and below – predators deal with their victims with their help. 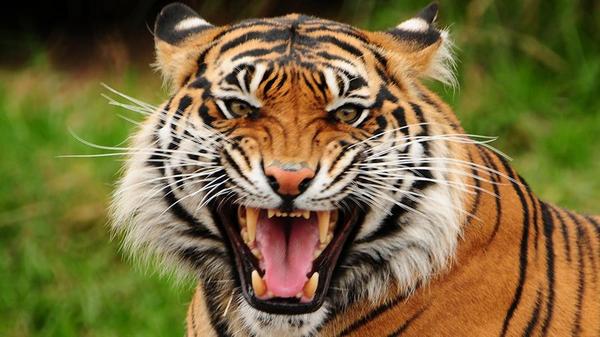 The front legs of the tiger have five toes; the hind legs have only four. There are extension claws on each of the tiger’s toes (tigers use them for hunting).

A tiger’s fur depends on the species and habitat. So the fur is short and dense in southern tigers; while the fur is fluffier in northern tigers.

The tiger skin is yellow or brown with signature black stripes located throughout the body. Tiger stripes have characteristic pointed endings, sometimes parted and reunited. There are about 100 stripes on the body of the tiger on average. A tiger’s tail is also covered with rings of stripes. 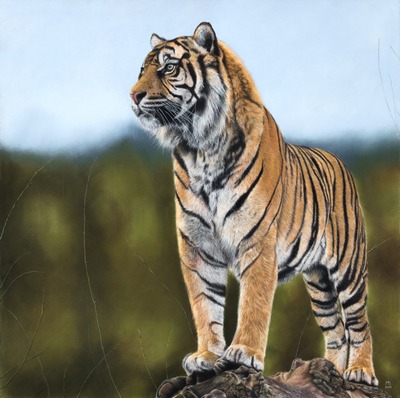 Remember that the word “tiger” is translated from the Persian language as “sharp, fast”, so it is really fast, and despite its impressive weight, this predator is capable of speeds up to 60 km per hour.

Tigers have an impressive roar. A tiger’s roar can be heard at a distance of 3 km. 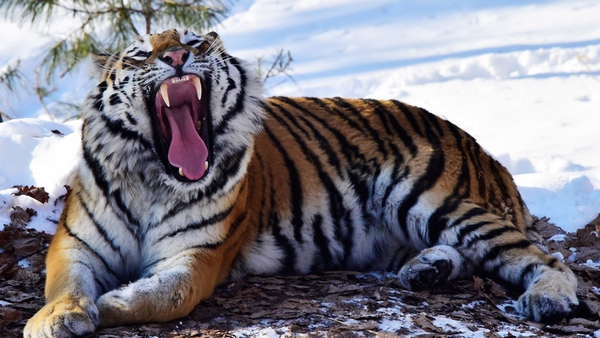 How long do tigers live? Tigers live about the same as their relatives, domestic cats – about 16-20 years on average.

Where do tigers live? Tigers live mainly in Asia, from the Siberian taiga to the South Asian jungle of Sumatra. Many tigers live on the territory of such Asian countries as China, Korea, India, Pakistan, Thailand, Vietnam, Cambodia, Burma, Indonesia.

Tigers prefer forest terrain, tropical rainforests, bamboo thickets or the harsh Siberian taiga as habitats. They adapt perfectly to the environment. Tigers like to arrange their lairs in reed thickets near ponds. 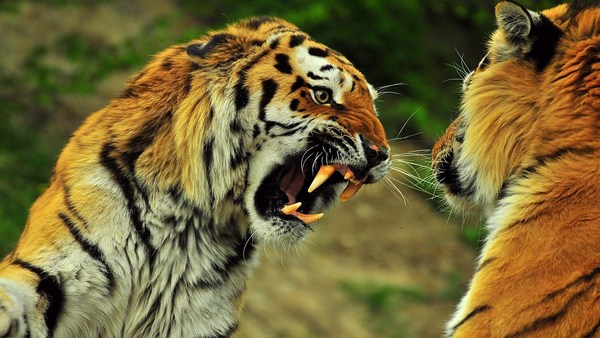 Under natural conditions, tigers live either singly or in small families (something in the manner of prides among lions). The relations of tigers from one family are always friendly. Sometimes they behave amusingly during communication, touching each other with their faces in contact. But if another tiger accidentally wanders into their territory, then it will not be greeted.

What do tigers eat? Tigers are notorious predators. An adult tiger at a time can eat 30-40 kg of meat (66-88 pounds). The main source of their food is ungulates and large herbivores: wild boars, tapirs, deer, and roe deer. The tiger is a perfect swimmer and does not mind eating not only meat but also fish. Sometimes even a small elephant may become lunch for a tiger, but tigers are afraid of attacking adult elephants (as well as rhinos). 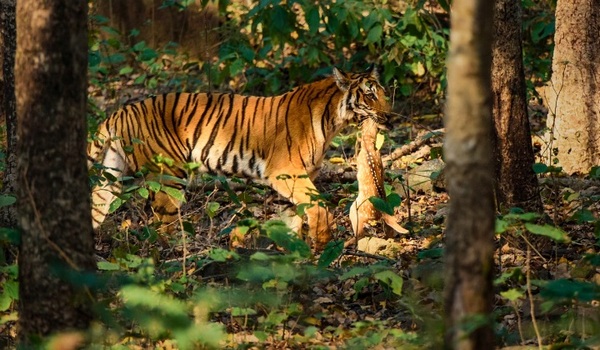 Tigers hunt at different times – when they hungry, then they go hunting, and this can be either day or night, morning and evening. They always hunt alone, while using two methods: either they are sitting in ambush, patiently waiting for potential prey, or they carefully creep up to it.

Since the tiger is literally at the top of the food chain; it has no enemies in natural conditions. (Including other predators: leopards and even packs of wolves are afraid of tigers and prefer to bypass them). 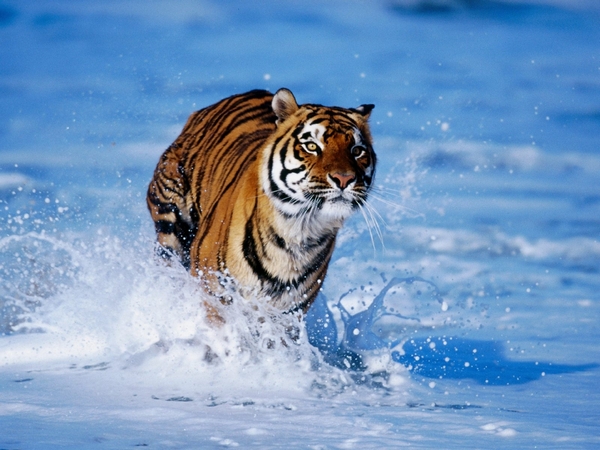 Nevertheless, of course, man became the main enemy of the tiger, moreover, the extermination of tigers by hunters led to the fact that many species of these striped “cats” were on the verge of extinction. Now tigers are listed in the Red Book of the planet, and hunting for them is strictly prohibited.

There are nine species of tigers. Though three of them: the Balinese tiger, the Caspian tiger, and the Javan tiger, unfortunately, have disappeared from the face of the Earth forever. We’ll describe in detail the remaining species that have been preserved. 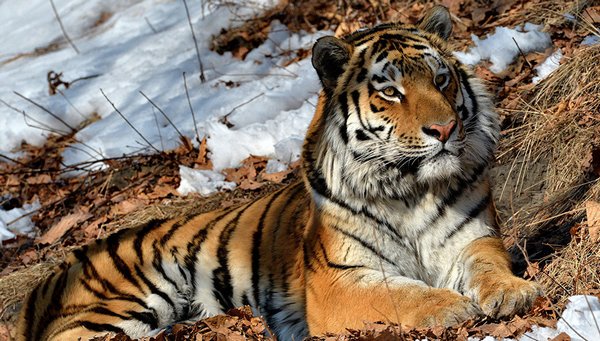 The Bengal tiger is also one of the largest in the tiger family. There are Bengal albino tigers in nature, which are a mutated species. Bengal tigers live in several Asian countries: India, Pakistan, Nepal, Bhutan, Bangladesh. 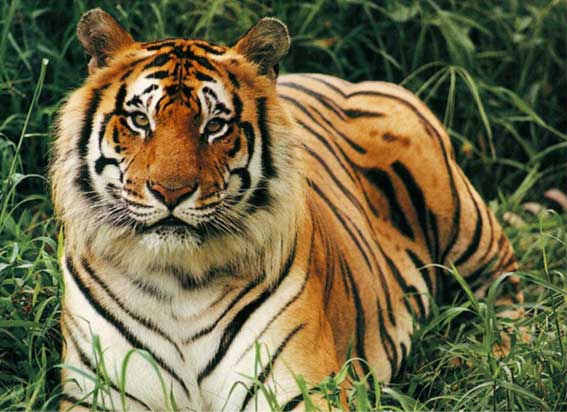 The Indochinese tiger has a murky-red color and slightly smaller sizes than their Bengal and Amur relatives. They are up to 2.85 cm in length and weighs 150-195 kg (330-430 pounds). These tigers live in southern China, as well as in Thailand, Vietnam, Cambodia, Laos, Burma. 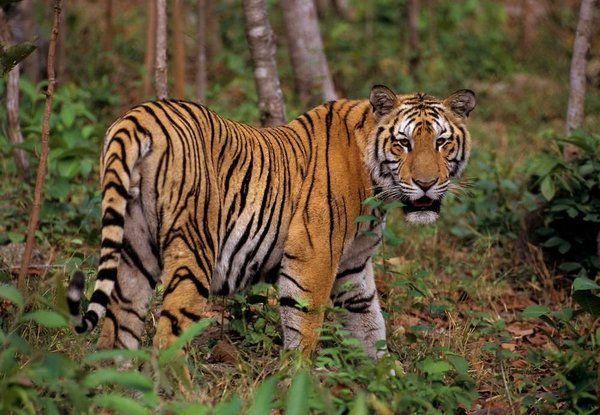 The Malay tiger inhabiting the Malacca Peninsula is notable for being the smallest among tigers. Its length is only 237 cm with a weight of up to 120 kg (260 pounds). Besides this, this tiger is listed in the Red Book and is on the verge of extinction. There are only about 600-800 individuals of the Malay tiger in nature. 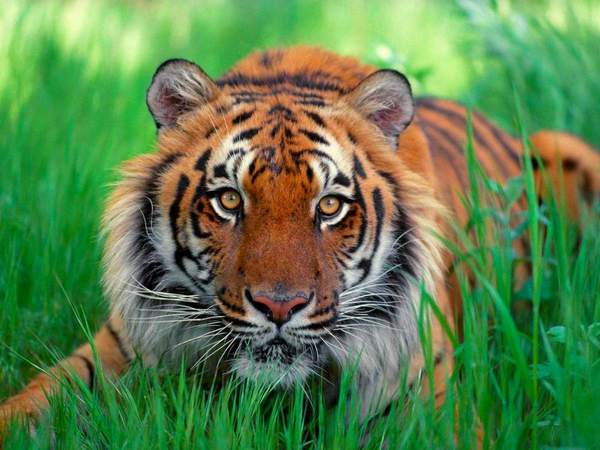 The Sumatran tiger living on the island of Sumatra and several other islands in Indonesia is also one of the endangered species of the majestic striped predator. The Sumatran tiger also does not big (in comparison with its large relatives, of course), but it is slightly larger than the Malay tiger, its length is 220-225 cm and weighs up to 140 kg (308 pounds). 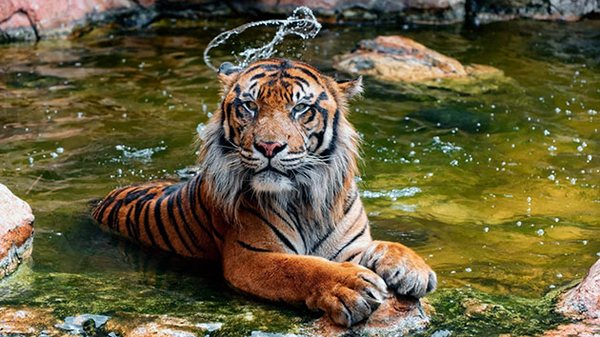 Tiger hybrids are called tigers born from crossing tigers themselves with other representatives of the panther genus. Among them are:

This is a hybrid of a lion and a female tiger. It has a huge size. 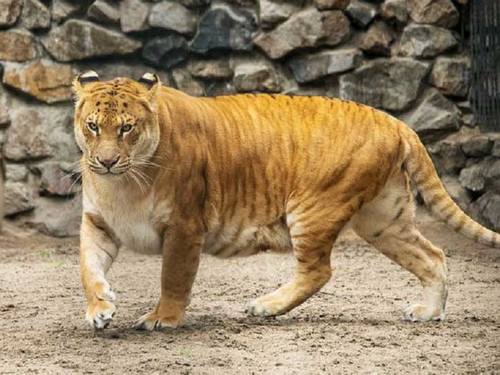 Tigon is just like a liger, but the opposite, its dad is a tiger, and its mother is a lioness. It is smaller in size than its parents and has the features of both: the stripes of the father and the spots of the mother, and males have a mane, though it is several times smaller than that of real lions. 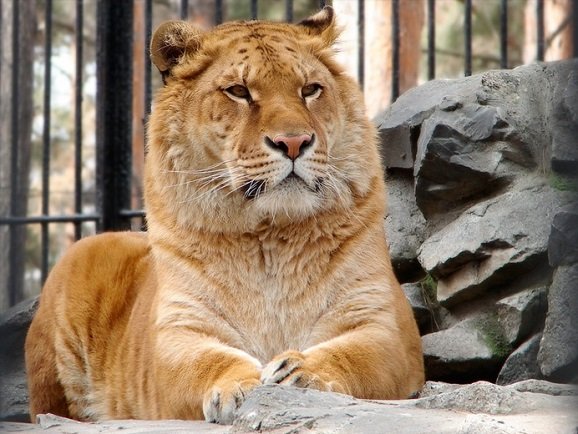 These hybrids of a lion and a tiger are born only in captivity, in zoos, in natural conditions they are not found.

The mating season in tigers falls in December-January. The male is actively courting the female at this time. Sometimes it happens that two males pretend for one femaleThen a fight occurs between them, and the strongest gets the female.

Pregnancy in a tigress lasts about 100 days; childbirth takes place in a tiger den. 2-4 kids are born at a time, in rare cases, there may be 6. Baby tigers are born blind and only a week later they begin to see. At first, small tigers feed on their mother’s milk. 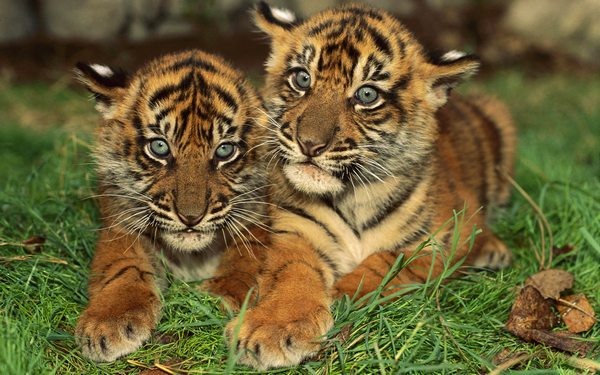 At this time, they grow very quickly. The mother tigress leaves her den for the first time with her children in 2 months after birth. Upon reaching one and a half years, the cubs turn into quite adult and large tigers. Usually, many young tigers live next to their mother before 3-5 years old.

For some reason, many are interested in this question. It is not possible to give an exact answer to it since there are very few recorded and documented fights between lions and tigers, which does not allow us to justifiably talk about the superiority of this or that animal. Yet it is possible to compare a lion and a tiger by some external parameters:

In any case, both the tiger and the lion are strong, powerful, and of course very dangerous predators, including dangerous ones for humans. 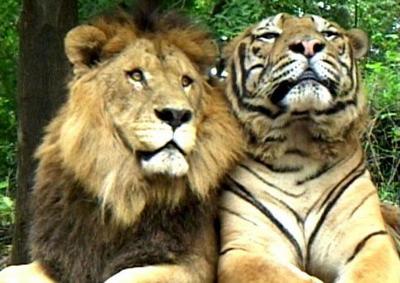