Mitosis vs Meiosis: Differences and Similarities 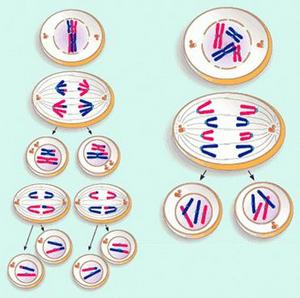 
There are many interesting and confusing topics in the multifaceted science of biology. One of them is the ways of cell division: mitosis and meiosis. At first look, there is a similarity between mitosis and meiosis – cell division occurs there and there, but at the same time there are significant differences between them. So, how is meiosis different from mitosis? In order to answer this question, first of all, let’s find out: what is mitosis and what is meiosis.

Mitosis in biology is the most common way of dividing all the somatic cells (body cells) of any living creature. During mitosis two daughter cells are formed from the original mother cell. They are absolutely identical in properties, both with each other and with the mother cell. Mitosis is most common in Nature because it is the basis of the division of all non-sex cells (nerve, bone, muscle, etc.).

There are 4 stages of mitosis:

What about meiosis? What is the difference between mitosis and meiosis? During meiosis four daughter cells are formed from the original mother cell. Yet the newly formed cells have only half the haploid set of chromosomes. What does this mean? According to some biologists, meiosis is not cell reproduction at all, since it is a way to form haploid cells, that is, a spores (in plants) and gametes (in animals). The gametes themselves will serve as the formation of a new organism only after fertilization, which in our case will be sexual reproduction.

You can see mitosis and meiosis differences and similarities at this picture. 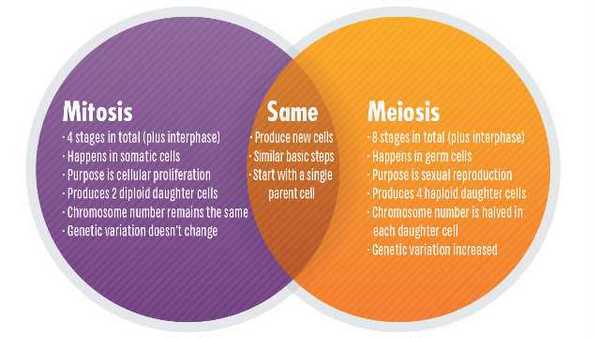 The meiosis phases are different from those of mitosis. Prophase in meiosis is many times longer since conjugation occurs in it – the connection of homologous chromosomes and the exchange of genetic information. Centromeres do not divide in anaphase. The interphase is very short and the DNA is not synthesized. Cells formed as a result of two meiotic сell divisions contain a single set of chromosomes. And only when two cells merge: maternal and paternal, diploidy is restored. Besides this, meiosis proceeds in two stages, known as meiosis І and meiosis ІІ.

A visual comparison of mitosis and meiosis and their stages can be seen in the picture. 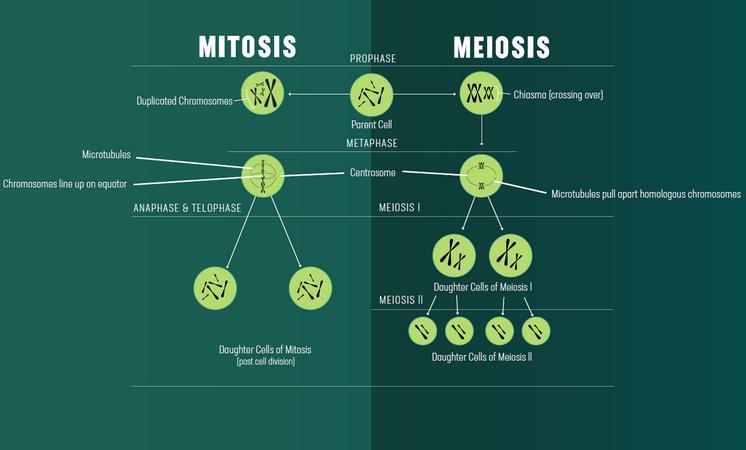 Now we will try to explain as simply as possible not only what the difference between mitosis and meiosis is, but also what is their biological significance. All non-sex cells of the body reproduce thanks to mitosis. The meiosis is just a way of forming germ cells, but only in animal organisms, in plants, due to meiotic division, spores multiply, and then from these spores, germ cells are formed by mitosis.