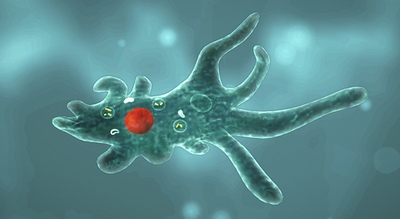 
Amoeba is one of the most famous simple single-celled organisms and is an important object for the study of biologists. Understanding how the simplest unicellular organisms exist and function will help us to learn the very beginning of a long evolutionary path. What is the structure of the amoeba, its habitat? How does the amoeba eat? Read more about this in our article.

The body shape of the amoeba is constantly changing; this is due to a change in its pseudopods or pseudopodia (which translates as “false feet”). The amoeba does not exceed half a millimeter in size. The body of the simplest is covered with a special membrane – a plasmalemma. There is a cytoplasm inside amoeba with important structural elements.

The amoeba’s cytoplasm has a heterogeneous structure and is conditionally divided into two parts: 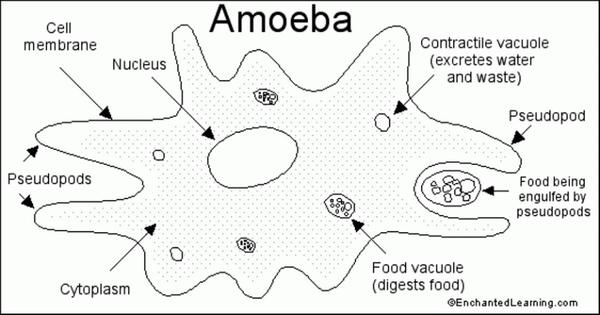 The central part of the amoeba is the nucleus. It is located almost in the center of its body. The nucleus has nuclear juice, chromatin, and is coated with a shell with numerous pores.

How does the amoeba move? If you’ll observe an amoeba under a microscope, you can see that it has numerous pseudopods, which are also called pseudopodia. These pseudopodia serve to an amoeba for movement.

Oxygen is necessary for the life of the amoeba; it receives from the water. Some people ask about amoeba breathing organ. If humans and other animals breathe with the help of the lungs, the amoeba breathes with its entire body, oxygen penetrates through the cytoplasm from the water, and the process of breathing consists of the oxidation by oxygen of organic substances in the mitochondria.

Amoebas live in the freshwater of lakes, swamps, small ponds. It can exist in aquariums. In general, the culture of amoeba is very easy to breed in laboratory conditions.

This is what an ordinary amoeba looks like under a microscope. 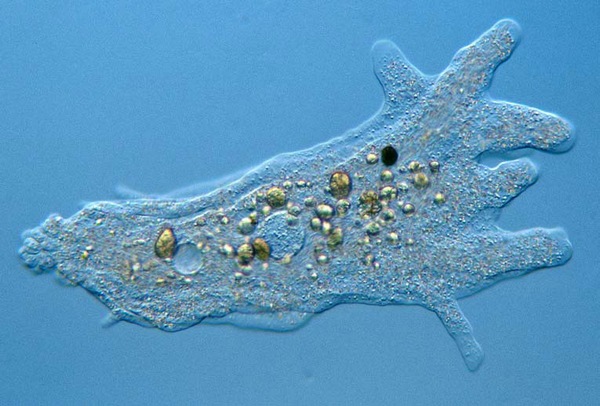 How does the amoeba eat? As we wrote above, the common amoeba can move with the help of its pseudopods. During their movement, amoebas encounter other small objects: unicellular algae, bacteria, and other simple organisms. If this object is small enough, then the amoeba absorbs it. The amoeba flows around its prey from all sides, and after some time it is already inside the amoeba cytoplasm.

The process of absorption of solid food by amoeba is called phagocytosis. The absorbed food in the cytoplasm is processed by a special digestive vacuole, which performs the function of the stomach in the amoeba. 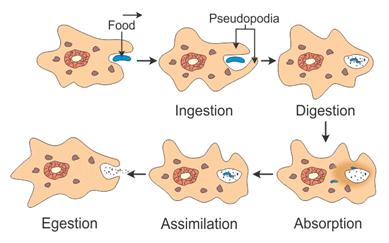 It is interesting that in addition to the digestive vacuole, the amoeba also has the contractile vacuole, which is also a pulsating vacuole. It is a bubble of an aqueous liquid that periodically grows, and when it reaches a certain size, it bursts, releasing its contents to the outside. The main task of the contractile vacuole is the regulation of the osmotic pressure inside the body of the amoeba. A difference in osmotic pressure is created inside and outside the cell because the concentration of substances in the amoeba’s cytoplasm is higher than in the surrounding water. Although freshwater penetrates the body of the amoeba, its amount always remains normal, because the contractile vacuole pumps out excess water from the cytoplasm.

The very process of reproduction-division begins with the mitotic division of the nucleus: one nucleus divides into two, which is then removed from each other. In parallel with this, the amoeba cytoplasm begins its separation. Yet the contractile vacuole does not separate but remains in one of the newly formed cells. In the second amoeba cell, the vacuole is formed anew. The reproduction-division of amoeba occurs very quickly; its speed depends on the ambient temperature. On hot summer days, the amoeba can even divide several times a day, but with the onset of winter colds, the division frequency decreases, and then completely stops. To survive the winter, the amoeba itself turns into a cyst – it is covered with a dense double protein shell. 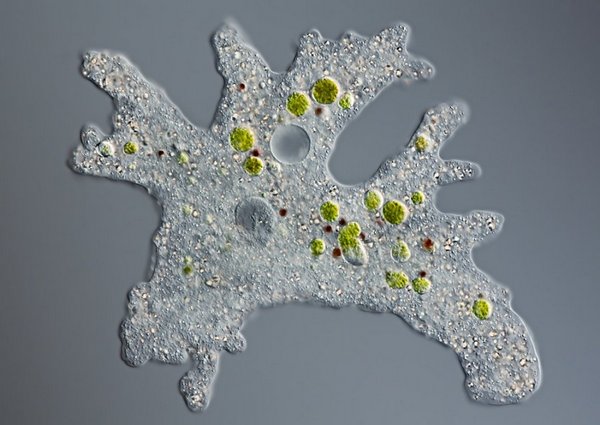 Amoeba is an important part of the ecological system since it is it that is responsible for regulating the number of bacterial organisms in lakes and ponds. It also purifies water from excessive bacterial contamination, absorbing bacteria. In turn, in the food chain, the amoeba itself serves as food for many small fish and insects.

The amoeba has its benefit for science; scientists conduct numerous experiments and studies on it.