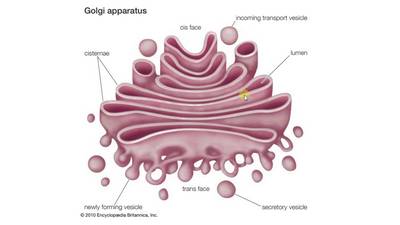 If we look at the Golgi apparatus through an electron microscope, we will see something resembling a stack of pouches stacked on top of each other with many bubbles nearby. There is a narrow channel in the middle of each pouch, which expands at the ends into the so-called tanks (bubbles appeared from them). A system of interconnected tubules is forming around the central stack.

The external side of the Golgi apparatus has a slightly convex shape, where our stacks form new tanks by the merger of bubbles appearing from a smooth endoplasmic reticulum. The tanks complete their ripening and also disintegrate again into bubbles from the inside of the apparatus. Similarly, there is a movement of tanks from the outside of the organelle to the inside.

What does the Golgi apparatus look like? See this picture.

The role of the Golgi apparatus in the life of the cell is diverse. The Golgi apparatus is responsible for modification and redistribution of synthesizing substances and also their removal outside the cell, the formation of lysosomes and the construction of the cytoplasmic membrane.

The Golgi apparatus secrete carbohydrates, which serve as a matrix for plant cells during the formation of the cell wall. The budded Golgi vesicles move and their membranes merge with the cytoplasmic membrane, and the contents are incorporated into the cell wall.

The Golgi complex of goblet cells (they are located in the thickness of the epithelium of the intestinal mucosa and respiratory tract) secrete mucin glycoprotein; it forms mucus. 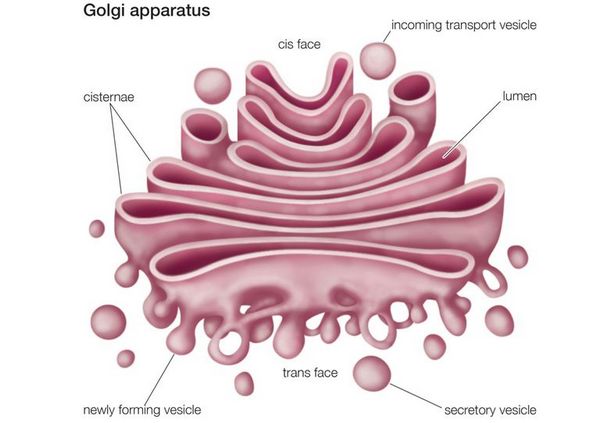 The Golgi apparatus performs the important function of moving lipids in the intestinal cells. This happens this way: fatty acids and glycerol enter the cells, and then their lipids are synthesized in the endoplasmic reticulum. Most of the endoplasmic reticulum are coated with proteins and transported to the cell membrane using Golgi vesicles, through which the lipids will end up in the lymph.

Besides this, lysosomes are formed thanks to the Golgi apparatus.