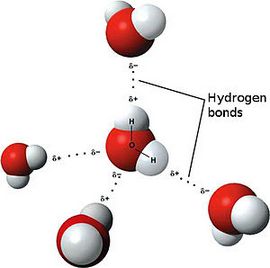 For the first time, a covalent chemical bond was discovered back in 1916 by the American chemist J. Lewis. What did chemists find out about it? During the chemical interaction of two atoms, the transfer of electrons from one atom to another may not be possible because electronegativity of nonmetals is quite big. At this point, covalent bonds occur between the electrons of both atoms.

There are two types of covalent bond:

The exchange type of covalent bond occurs when each of the connecting atoms represents one unpaired electron for the formation of an electron bond. In this case, these electrons must have opposite charges (spins).

An example of such a covalent bond can be the bonds occurring in a hydrogen molecule. When hydrogen’s atoms approach each other, they penetrate into each other’s electron clouds. In chemistry, this is called overlapping electron clouds. As a result, the electron density between the nuclei increases, they themselves attract each other, and the energy of the system decreases. However, when the distance between nuclei is too close, they start to repel each other, and thus some optimal distance between them occurs.

More clearly this is shown in the picture.

The donor-acceptor type of a covalent bond occurs when one particle (the donor) represents its electron pair for the bond, and the second (the acceptor) represents a free orbital.

A nonpolar covalent bond definition is simple; it is a bond that is formed between two identical atoms. 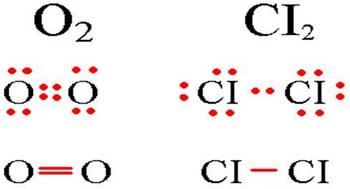 In molecules with a covalent non-polar bond common electron pairs are located at equal distances from the atomic nuclei. For example, in an oxygen molecule, atoms get an eight electron configuration, and they have four common pairs of electrons. 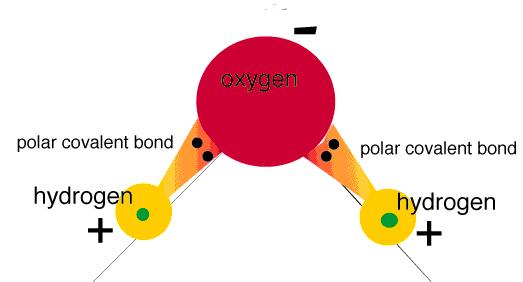 This is the polar covalent bond scheme.

Water is a prime example of a substance with a polar covalent bond.

Well, now you know the answer to the question of how to define a polar covalent bond, and how to define a nonpolar. It’s enough to know the properties and chemical formula of molecules, if molecule consists of atoms of different elements, then the bond will be polar. If the molecule consists of one element, then the bond will be nonpolar. Besides this, it is important to remember that covalent bonds can only occur among non-metals, this is due to the mechanism of covalent bonds described above.