Jupiter – the Largest Planet in Our Solar System 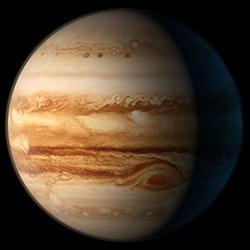 
The planet Jupiter is the largest in our Solar System, besides the Sun. This is the reason why planet Jupiter was named after the main god of the ancient pantheon – Jupiter in Roman mythology (or god Zeus in Greek mythology). Who discovered Jupiter? What does Jupiter look like? Answers to all these questions and many more interesting facts about Jupiter are found in this article.

The history of Jupiter is quite interesting. Babylonian astronomers of the ancient world were already well aware of Jupiter. The first mentions of this planet in history are found in their writings. The Jupiter is so big that it could always be seen in the starry sky with the naked eye.

The famous astronomer Galileo Galilei was the first to study the planet Jupiter through a telescope. Besides this, he discovered the four largest moons of Jupiter.

Many astronomers examined Jupiter through their telescopes, making interesting discoveries. For example, astronomer Cassini discovered a large red spot on the surface of the planet (we will write more about it below) and calculated the rotation period and the differential rotation of the atmosphere of Jupiter. Astronomer E. Bernard discovered the last moon of Jupiter – Amatheus. 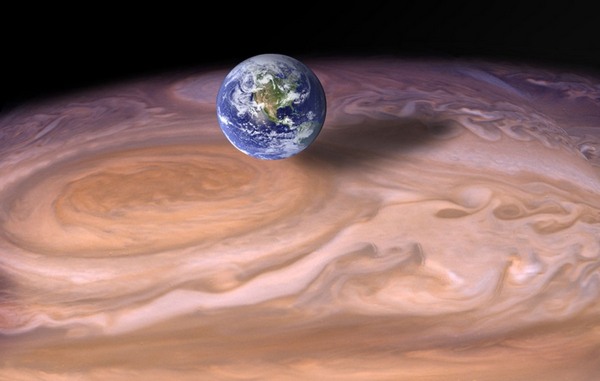 What is the surface temperature of Jupiter? Considering the great distance from the Sun to Jupiter, it is logical to assume that it is cold on Jupiter, but not everything is so simple. The external atmosphere of the giant is really cold, the temperature there is about -145 °C (-229 °F), but as it deepens several hundred kilometers deep into the planet, it becomes warmer. The temperature on the surface of Jupiter can reach up to 153 °C (307,4 °F). Such a strong temperature drop is due to the fact that the surface of the planet consists of burning hydrogen, which produces heat. Besides this, the molten inner parts of the planet emit even more heat than Jupiter itself receives from the Sun.

The strongest storms raging on the planet (wind speed reaches 600 km per hour), which mix the heat emanating from the hydrogen component of Jupiter with the cold air of the atmosphere.

As you can see, the physical conditions on Jupiter are very harsh. So, taking into account the absence of a solid surface, high atmospheric pressure and high temperature on the very surface of the planet, life on Jupiter is not possible.

If we begin to sink deeper into the bowels of the planet, we will notice changes in the density and temperature of hydrogen and helium. Based on these changes, scientists have identified such parts of the planet’s atmosphere as the troposphere, stratosphere, thermosphere, and exosphere.

Perhaps readers have noticed that Jupiter is very similar to the Sun. So the question arises why Jupiter is still a planet, but not a star. The fact is that it simply did not have enough mass and heat to begin the fusion of hydrogen atoms into helium. According to scientists, Jupiter needs to increase its current mass by 80 times in order to start the thermonuclear reactions that occur on the Sun and other stars.

Just see these pictures of the planet Jupiter 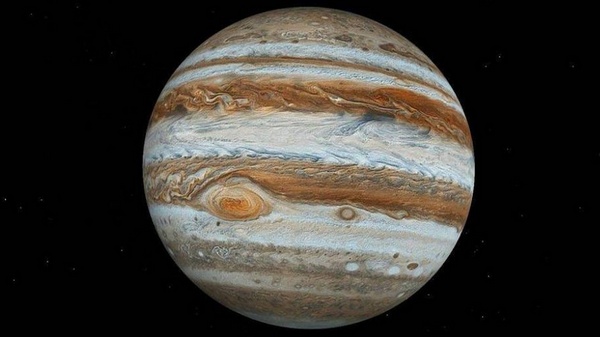 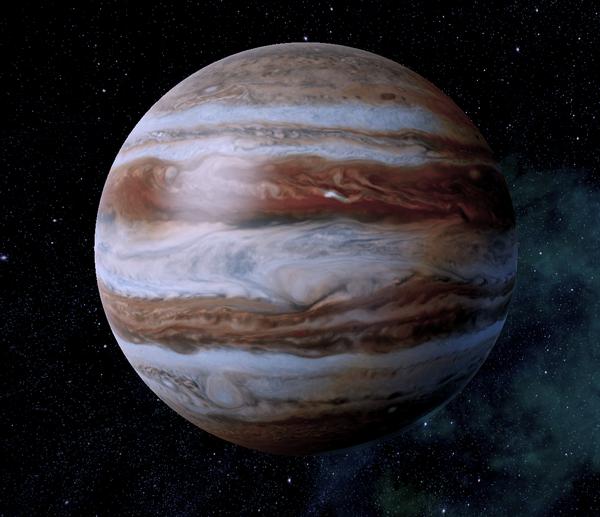 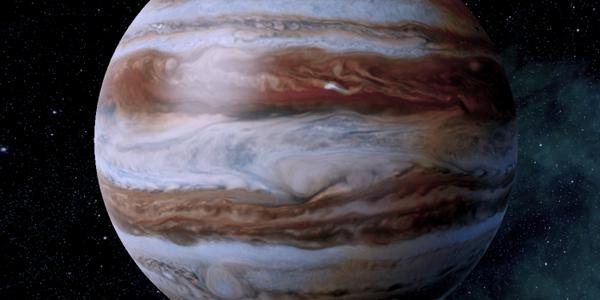 Does Jupiter have a surface? No, and due to the absence of a solid surface in a giant planet, scientists have adopted a lower point in its atmosphere, where the pressure is 1 bar, for a certain conventional surface. The various chemical elements that make up the atmosphere of the planet contribute to the formation of the colorful clouds of Jupiter, which we can observe in a telescope. It is the ammonia clouds responsible for the red-white striped color of the planet Jupiter. 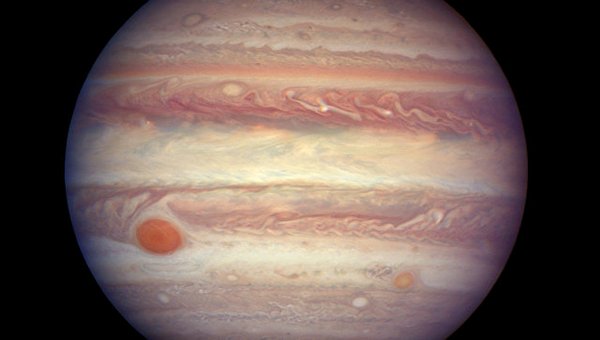 If you’ll carefully examine the surface of the Jupiter, then the large red spot won’t slip away from your attention. This red spot was first noticed by astronomer Cassini while watching Jupiter in late 1600. What is this big red spot of Jupiter? According to scientists, this is a large atmospheric hurricane, and so large that it has been raging in the southern hemisphere of the planet for more than 400 years and possibly longer (considering that it could have occurred long before Cassini saw it). 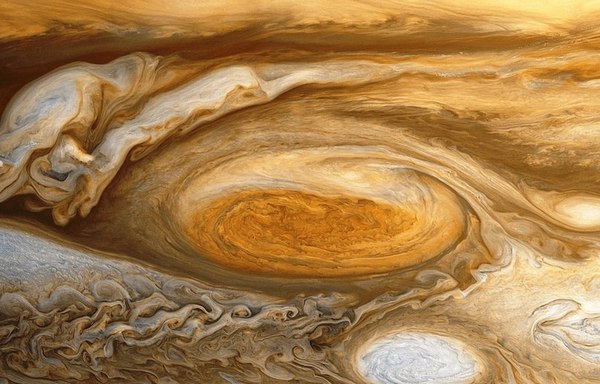 Although, in recent times, astronomers have noticed that the storm began to slowly subside, as the spot size began to decline. According to one hypothesis, a large red spot will take on a circular shape by 2040, but how long it will last is unknown.

At the moment, the exact age of the planet Jupiter is unknown. The difficulties of its determination are that scientists do not know how Jupiter was formed. According to one hypothesis, Jupiter like other planets was formed from the solar nebula about 4.6 billion years ago, but this is just a hypothesis.

Yes, Jupiter, like any decent giant planet, has rings. Of course, they are not as big and noticeable as rings of his neighbor Saturn. The rings of Jupiter are thinner and weaker, most likely they consist of substances ejected by the giant’s moons when they collide with asteroids and comets. 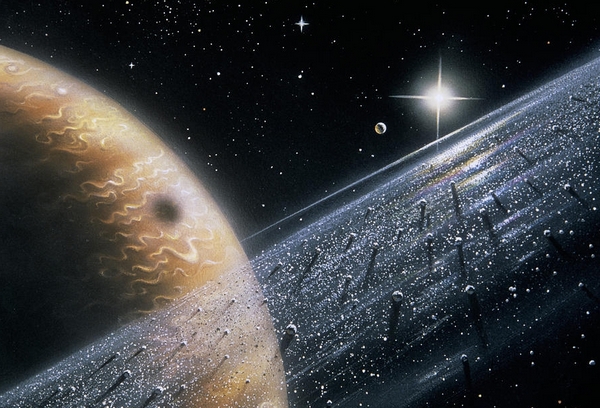 Jupiter has 67 moons, in fact, more than all the other planets of the solar system. Moons of Jupiter are of great interest to scientists. Some of Jupiter’s moons are bigger than small planets like Mercury. Some of them may have reserves of groundwater. 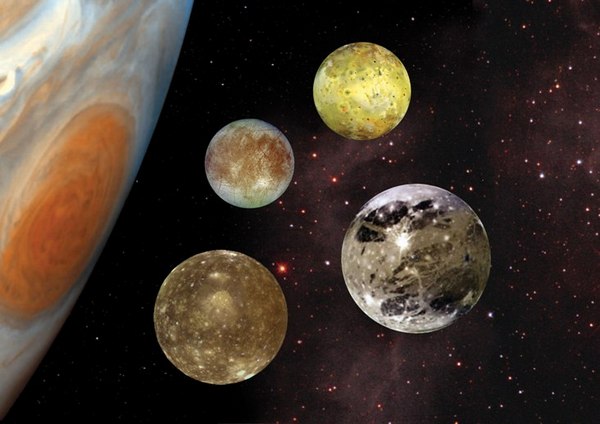 How long is Jupiter’s year? One year on Jupiter lasts our 11.86 Earth years. For such a period of time, Jupiter makes one turnover around the sun. How fast does Jupiter rotate? The speed of the planet Jupiter in orbit is 13 km per second. The orbit of Jupiter is slightly inclined (about 6.09 degrees) compared to the ecliptic plane.

The distance between Jupiter and Earth is about 628 million kilometers.